The Ministry of Power’s (MoP) latest data on the aggregate technical and co­mmercial (AT&C) losses of discoms for 2021-22 brings some hope for the power sector. As per a preliminary an­a­lysis AT&C losses have declined significantly to 17 per cent from around 22 per cent in the previous year. The reduction in AT&C losses has in turn reduced the gap between the average cost of supply (ACS) and average realisable revenue (ARR). The ACS-ARR gap (on a subsidy received basis, excluding regulatory in­co­me and the UDAY grant) has dec­lined from Re 0.69 per kWh in 2020-21 to Re 0.22 per kWh in 2021-22. The early signs of improvement in the operational and financial performance of the discoms can be attributed to a host of policy reforms implemented in the segment. Notably, with the implementation of the Electricity (LPS and Related Ma­tters) Rules, 2022, the total outstanding dues of the states, which were at Rs 1,379 billion as of June 3, 2022, have decreased by Rs 298 billion due to the timely payment of five monthly instalments.

AT&C losses: As per the latest data released by the MoP, the AT&C losses of discoms, which were hovering around 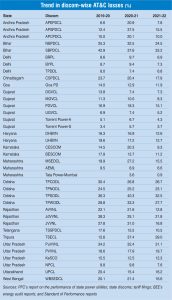 Discom-wise, the data tracked by Power Line for 2021-22 indicates a si­gnificant reduction in AT&C losses ac­ross discoms (see Table). Several disco­ms have recor­ded single-digit AT&C losses. These include APEPDCL, BRPL, BYPL, TPDDL, DGVCL, MGVCL, UGVCL, Torrent Power – Ahmadabad and Surat, CESCOM AEML and NPCL. As per PFC’s latest report on the performance of power utilities, AT&C losses for distribution utilities deteriorated from 20.73 per cent in 2019-20 to 22.32 per cent in 2020-21. AT&C losses are not evenly distributed across the country. While some states report best-in-class losses of 5-13 per cent, others are deeply in the red, wi­th losses exceeding 30 per cent.

Notably, as per PFC estimates, the red­uc­tion in AT&C losses from nearly 20 per cent in 2020-21 to 17 per cent in 2021-22 is likely to result in savings of nearly Rs 200 billion in the power purchase cost (PPC) for discoms and a reduction of nearly 7 million tonnes of carbon dioxide for the overall power sector. This is based on the assumption of 6 per cent year-on-year increment in annual sales and PPC in 2021-22 over 2020-21 and an improvement in collection efficiency from 92.4 per cent to 95 per cent. The contribution of coal plants was assumed to be 52 per cent of the total energy supplied with an emission factor of 0.83 kg CO2 per unit.

Discom dues: As per the power minister’s written reply dated December 20, 2022 in the Rajya Sabha, the implementation of the Electricity (LPS and Related Matters) Rules, 2022 has led to a remarkable improvement in the recovery of out­standing dues. The total outstanding dues of the states, which were at Rs 1,379.49 billion as of June 3, 2022, have be­en reduced to Rs 1,080.92 billion, with the timely payment of five monthly in­s­talments. Distribution companies have paid Rs 1,680 billion of their current dues in the last five months and are paying their current dues in time in compliance with the LPS Rules.

Subsidy dependence: The subsidy de­pendence of the state discoms for financial year 2023 is estimated to increase by 10 per cent year on year to around Rs 1.5 trillion owing to the increase in the cost of supply. Five states with the highest power subsidy booked – Madhya Pra­de­sh, Rajasthan, Karnataka, Punjab and An­dhra Pradesh – account for 54 per cent of the power subsidy at an all-India level. Over the last five years, the subsidy realised has been 90-95 per cent of the overall subsidy booked for the year, barring financial year 2021, when the deviation was higher due to Covid-19.

RDSS: Earlier this year the prime minister formally launched the power ministry’s flagship reforms-based and re­su­lts linked Revamped Distribu­tion Sector Scheme (RDSS) targeted at improving the operational performance and financial sustainability of the power distribution segment. This is the biggest distribution scheme so far with an outlay of Rs 3 trillion scheme for a period of five years (2021-22 to 2025-26). It attem­pts to be more result oriented with the availability of grants under the scheme subject to achievement of performance mi­le­stones. Notably, it aims to achieve 100 per cent prepaid smart metering at all levels and eliminate the ACS-ARR gap by 2024-25 while reducing pan-India AT&C losses to 12-15 per cent.

With regard to progress under the sc­heme, the initial activities of the scheme launch and the discom onboarding have been completed. A total of Rs 1.16 trilli­on has been sanctioned under the sc­heme so far. Meanwhile, 190 million sm­art me­ters have been sanctioned under sche­me. The first annual apprai­sal of the discoms under the RDSS as per the perform­ance trajectories laid out in utility action plans is expected soon. Under the sche­me, every year discoms are to meet their pre-qualifying criteria to get appraised for sanctions. Sub­sequently, the annual component of government budgetary su­pport is released based on their score on the result evaluation matrix.

LPS Rules: The MoP, on June 3, 2022, no­tified the Electricity (LPS and Related Matters) Rules, 2022, with the objective of ensuring regular monthly cash flows to generating companies and instilling payment discipline in discoms. The rules offer a one-time re­laxation to discoms wherein the am­ou­nt outstanding, including the principal amount and the LPS on the date of notification of the scheme, will be frozen without further imposition of LPS and will be re­paid by discoms through monthly ins­talments of 12-48 months.

The discoms in Andhra Pradesh, Telan­gana, Karnataka, Jharkhand, Jam­mu & Ka­sh­mir, Rajasthan and Madhya Pra­desh, etc. have received sanctions aggregating Rs 1 trillion from PFC and REC to clear the outstanding dues to the power generating companies through instalments of 12-48 months. The majority of the discoms are adopting the 12-mo­nth instalment to clear their dues.

Based on the results achieved so far, it is expected that strict implementation of the LPS Rules will improve the financial viability of the power sector and at­tract investment to ensure reliable 24×7 electricity to consumers. The ru­les have not only ensured that the outstan­ding dues are liquidated, but also that the current dues are paid in time.

Prudential lending norms for utilities: Power sector non-banking finance companies – PFC and REC – have adopted ad­ditional prudential guidelines for sanctioning working capital loans to discoms, power transmission companies and generation companies. These are also being adopted by certain public sector banks. The norms entail that lo­a­ns extended to discoms and other state-owned utilities would be contingent on their performance against prescribed conditions. The additional prudential nor­ms for working capital lending to st­ate utilities include timely filing and issuance of tariff orders, determination of full-cost tariff by SERCs; timely availability of audited annual reports and preparation of quarterly accounts; no outstanding dues from the state government departments to discoms and timely release of subsidies by the state governments; no default on any loan from bank/financial institution; adherence to the AT&C trajectory and ACS-ARR gap as prescribed by the MoP/GoI scheme and adherence to working capital norms as a percentage of revenue. These prudential lending practices are encouraging utilities to reduce their debt and undertake steps to improve their financial viability.

One of the biggest issues facing the pow­er distribution segment is the absence of cost-reflective tariffs. As per ICRA Rese­arch, the tariff hikes approved by the SERCs over the past five years have been low despite the rising cost structure. While the extent of tariff hikes app­roved by the SERCs was higher for financial ye­ar 2023 compared to the previous two years, it remained lower than the proposed hikes. It also notes that despite upward pressure on the PPC (which constitutes over 75 per cent of a discom’s cost structure) over the years, the tariff revisions across key states do not reflect in the cost structure, leading to under-recovery of tariffs for the state distribution utilities. Inadequate tariff hikes resulted in increased regulatory assets and associated carrying costs. Another issue in the power distribution segment is that actual discom losses continue to be higher than the approved levels.  Apart from this, delays in subsidy pay­ments by the state governments ha­ve created a receivable buildup for discoms, constraining their liquidity position. The high levels of subsidies are lar­gely attributable to free power supply to agricultural pump sets in most states and highly subsidised power supply to certain sections of domestic consumers.

A number of reforms are on the anvil to transform the power distribution segment. The Electricity (Amendment) Bill, 2022, recently introduced in the Lok Sa­bha, seeks to facilitate the use of distribution networks by all licensees under the provisions of non-discriminatory open access. It aims to enable competition, enhance efficiency of distribution licensees and ensure sustainability of the power sector. Apart from this, the central government’s plans to privatise power distribution across power departments and utilities in UTs has made progress, with two UTs (Dadra & Nagar Haveli and Daman & Diu, and Chandi­garh) successfully awarded and the remaining ones in the pipeline.

The untapped potential at the downstr­eam of the energy value chain is expected to shape the future of power distribution in a big way in the coming years. Growing renewable energy generation, increasing penetration of smart grids, deployment of battery energy sto­r­age so­­lutions, uptake of smart metering so­lutions, and increasing share of energy prosumers are expected to drive to gr­owth of the segment going forward. Ov­er­all, the timely implementation of the go­­vernment schemes and programmes as well as monitoring of their on-ground implementation remain crucial for the sector. Besides this, addressing the legacy issues pertaining to untimely tariff re­vision and build-up of regulatory assets in the sector is important.

Even though the aggregate technical and commercial (AT&C) losses in the distribution segment have declined over the past few years, these losses vary widely across states and continue to pose a challenge for the discoms. […]