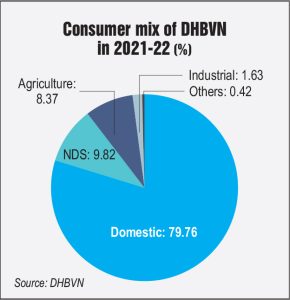 Over the years, DHBVN has been pro­actively implementing a number of efficiency and loss reduction measures to deliver a strong operational and financial performance, besides improving supply reliability in both urban and rural areas. It is one of the few distribution utilities in India that are currently operating at a sub-15 per cent aggregate technical and commercial (AT&C) loss level (12.59 per cent). Notably, it has also managed to lower its transmission and distribution (T&D) losses with respect to rural feeders by over 25 per cent in the last six years. Financially, DHBVN has been recording profits continuously since 2017-18. Its collection efficiency is over 100 per cent. Further, it eliminated its average cost of supply-average revenue realised (ACS-ARR) gap in 2017-18, two years ahead of the target set by the Ujwal Discom Assuran­ce Yojana.

DHBVN’s rankings in the annual discom rating exercise carried out by the Ministry of Power reflect this strong performance. In both the Ninth and Tenth Annual Integrated Rating and Rankings, for the years 2019-20 and 2020-21 res­pe­c­tively, DHBVN has been accorded the highest A+ rating. Further, its customer satisfaction rate was 97 per cent during 2020-21. 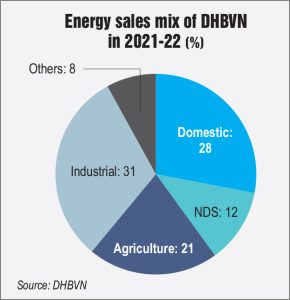 As part of its loss reduction initiatives for rural areas, the discom has implemented various measures and reforms under the flagship programme launched by the state government, the Mhara Gaon Jag­mag Gaon scheme. The scheme aims to reduce theft and provide 24×7 power supply to rural feeders through cabling, me­ter relocation, meter replacement and new connections. As of August 2022, wo­rk on 792 feeders (2,707 villages) out of a total of 1,118 feeders (3,665 villages) has been completed, while work on another 159 feeders (548 villages) is in progress. As a result of the scheme, T&D losses fell significantly to 35.78 per cent in 2021-22 from 61.32 per cent in 2015-16.

To reduce AT&C losses in urban areas, measures such as meter relocation and sealing of meters; replacement of defective meters, electromechanical meters and theft-prone meters; aerial bunched cabling in theft-prone areas; and release of new connections for unelectrified ho­useholds with unauthorised connections and in slum areas have been implemented. As a result, the number of urban feeders with distribution losses be­low 25 per cent increased significantly to 925 during 2021-22, compared to 568 in 2016-17.

To improve billing efficiency, DHBVN has taken various measures such as re­placing defective meters and ensuring timely resolution of bill-related complaints. An emphasis has been laid on meter reading through meter downloads to minimise human interface. The discom has also automated the process of site verification through a real-time mobile application. Further, it has mi­gra­ted 100 per cent of its billing to a real-time billing application. To resolve consumer complaints in an effective manner, centralised back offices (CBOs) have been established. The aim of the CBOs is to simplify the revenue realisation and revenue generation process and reduce the undue burden of billing and bill rectification on field offices, resulting in less effort being spent on improving revenue realisation. System strengthening and segregation of agricultural feeders have also been taken up to reduce losses.

A trust reading facility was introduced for domestic, non-domestic service and LT consumers with connected loads of up to 20 kW in May 2020. Consumers may use this facility to take their own meter reading in case the reading re­corded in their bill is incorrect. Further, a facility for getting bill details through a missed call has been introduced; and real-time spot billing has been undertaken in 70 subdivisions. The remaining subdivisions are also being billed throu­gh a mobile application. All citizen services are being provided through this online portal as well as the Saral platform. The ability to make online payments through real-time gross settlement, Paytm, BHIM and other payment gateways has been introduced. Curren­tly, more than 80 per cent of DHBVN’s revenue is received online. Moreover, to improve consumer satisfaction, a 24×7 call centre has been laun­ched with toll-free calling, email, SMS and WhatsApp facilities for registering consumer complaints. Further, outage-related information is being disseminated through the Urja Mitra App. 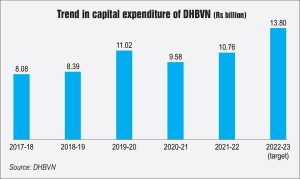 A key area of concern for the discom is the release of renewable energy subsidies. Against the announced subsidy of Rs 45.38 billion, the state government has released only Rs 28.92 billion. The di­s­com is also facing challenges on account of the pending government departmental dues, amounting to Rs 3.83 billion.

The discom is also planning to participate in the newly launched Revamp­ed Distribution Sector Scheme. To this end, a distribution reform committee and a district electricity committee ha­ve been formulated for both state discoms, while the appointment of a project management agency is in progress. An action plan and a detailed project report worth Rs 44.06 billion for the RDSS have been approved.

Net, net, with consistent efforts, the discom is confident of reducing its AT&C lo­sses to single digits in the coming ye­ars while enhancing electricity supply for its consumers in rural areas.

With inputs from a presentation by Anil Kumar Sharma, Chief Engineer, Commercial, DHBVN, at a recent Power Line conference

In May this year, Uttar Pradesh became the latest state to join the central government’s flagship “24×7 Power for All” scheme. Under the programme, the state has unveiled a number of key action plans and […]

Dakshin Gujarat Vij Company Limited (DGVCL), one of the four state discoms in Gujarat, was incorporated in 2003 post the unbundling of the erstwhile Gujarat Electricity Board. It caters to around 3.11 million consumers in […]

One of the long-standing wishes of the power industry has been to make the distribution segment self-sustainable by streamlining subsidies and introducing a direct benefit transfer (DBT) mechanism. Rightly so, the total subsidy dependence of […]