Consumer base and energy sales

As of March 2016, the total number of energy consumers in Telangana stood at over 12 million, registering energy sales of 40,650 MUs during 2015-16. Domestic consumers account for the majority (73 per cent) share in the consumer base, followed by agricultural (16 per cent), commercial (9 per cent) and industrial (1 per cent) consumers. In terms of energy sales, industrial and agricultural consumers accounted for the majority share of 28 per cent each, followed by domestic (24 per cent), commercial (7 per cent) and other consumers.  TSSPDCL caters to 59 per cent (around 7 million) of the total consumers in the state registering energy sales of 29,084 MUs during 2015-16. TSNPDCL, on the other hand, had a total consumer base of 5,274,777 as of March 2017. During 2016-17, the discom registered energy sales of 13,028 MUs.

The aggregate technical and commercial (AT&C) losses in Telangana stood at 14.20 per cent for the quarter ended March 2017. TSNPDCL and TSSPDCL recorded losses of 12.63 per cent and 14.97 per cent respectively. Notably, the AT&C losses in the state are significantly lower than the all-India loss level of 20.08 per cent. The state discoms have achieved a considerable reduction in the loss levels over the years. While TSSPDCL’s AT&C losses declined from 17.77 per cent in 2011-12 to 13.58 per cent in 2015-16, TSNPDCL’s losses reduced from 17.11 per cent to 12.84 per cent during the same period. With regard to various consumer-centric parameters, Telangana’s performance has been far better than the average all-India level. During May 2017, pending consumer complaints in the state stood at 1.1 per cent (against 10.3 per cent at the national level), the average duration of power cuts at 3:50 hours per month (all-India – 7:45 hours per month), the number of power cuts at 6.2 times per month (against 11 times per month at the all-India level), pending connection requests at 11.4 per cent (all-India – 60.4 per cent pending), electricity losses or thefts at 16.9 per cent (all-India – 22.6 per cent). Notably, Telangana is the best performing state in terms of e-payment of bills, with 34.30 per cent consumers undertaking e-payments in May 2017, as against 14.60 per cent at the all-India level.

For the Ujwal Discom Assurance Yojana, Telangana signed an MoU in January 2017 to improve the financial and operational performance of its discoms. The state has, so far, issued bonds for Rs 89.23 billion out of the aggregate discom debt of Rs 118.97 billion (as of September 2015).  For the quarter ended March 2017, the state fully met its targets for distribution transformer (DT) metering (urban), DT metering (rural), rural feeder audit, LED distribution under Unnat Jyoti by Affordable LEDs for All (UJALA), renewable purchase obligation, and reduction in the ACS-ARR gap. However, it failed to meet the targets for feeder segregation, providing electricity access to unconnected households, and AT&C loss reduction. During the same quarter, the state was ranked five based on its performance under the scheme, among the 22 participating states. Meanwhile, TSSPDCL and TSNPDCL were ranked 14 and 15 respectively among the 41 participating discoms/power departments.

For another distribution segment scheme, the Integrated Power Development Scheme, Telangana has witnessed a speedy implementation. As envisaged under the scheme (Phase I), IT-enablement of 38 towns has been completed and two SCADA centres have been commissioned. Meanwhile, urban strengthening has been completed in 30 out of 37 towns and feeder monitoring on the National Power Portal has been achieved up to 98.9 per cent. Of the Rs 6.53 billion sanctioned for Telangana under the scheme, 64 per cent or Rs 4.23 billion has been released so far. Besides, under Phase-II of the scheme for IT-enablement in Telangana, 30 towns have been covered, for which Rs 240.60 million has been sanctioned. In Telangana, the Deendayal Upadhyaya Gram Jyoti Yojana is aimed at intensive electrification of villages and below poverty line (BPL) households as all Census villages in the state were electrified at the time of formation of the state. Notably, intensive electrification of villages has been completed in the state, and 708,865 BPL households have been electrified so far under the scheme. Meanwhile, of the total 5.97 million households, around 1.03 million have been electrified as of April 30, 2017. 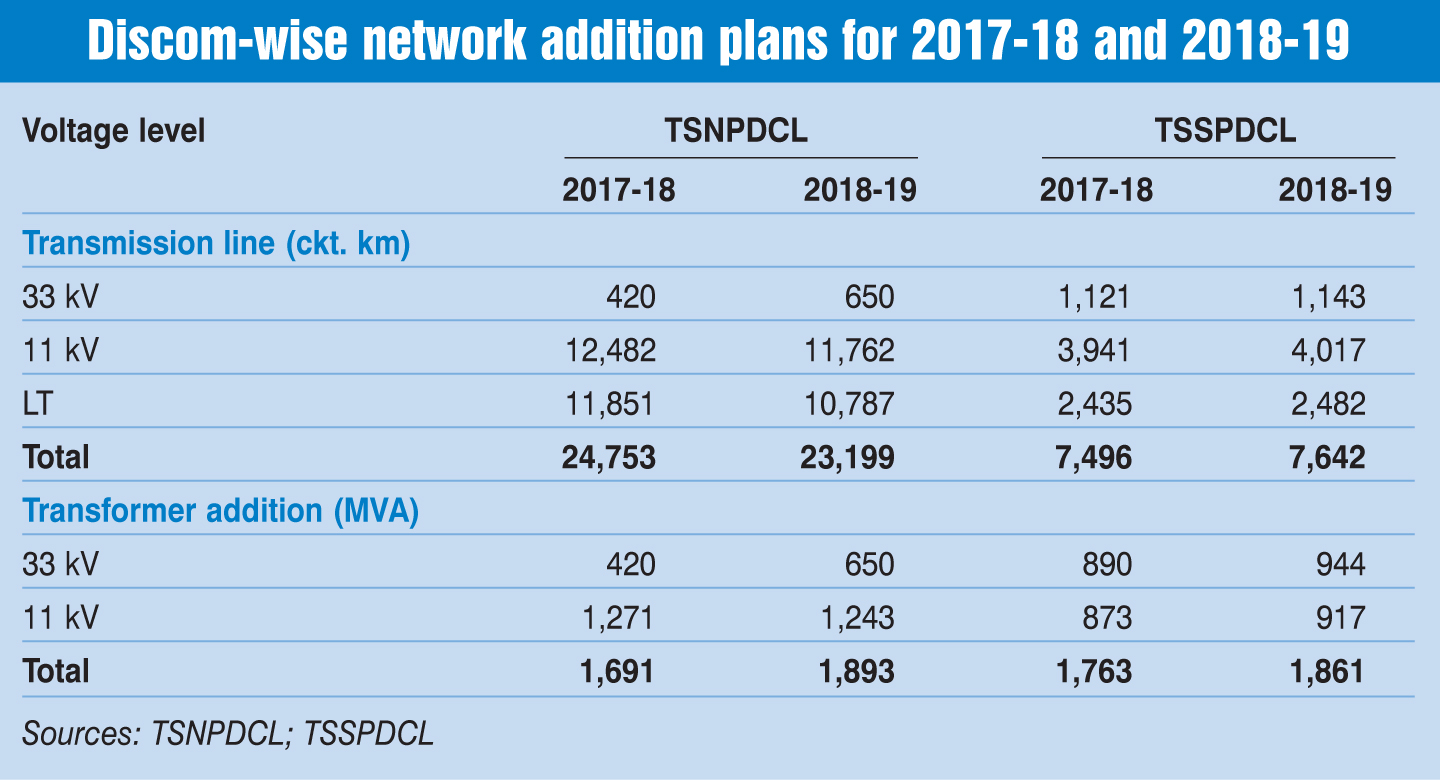 Key initiatives by the discoms

The Telangana discoms are undertaking a host of initiatives to strengthen their distribution network and enhance the consumer experience. Some of the key initiatives taken by TSNPDCL are the launch of a mobile application for reporting electrical exigencies, installation of swipe machines at electricity revenue office counters for bill payment, and release of agriculture services and domestic connections on a priority basis within the service-level agreement period. Further, the discom undertakes consumer interaction for ground-level updates on power supply conditions. A noteworthy network strengthening initiative taken by the discom is the Distribution Network Renovation Drive, which is aimed at the rectification of damaged/intermediate poles, damaged conductors, loose spans, etc.

Meanwhile, the key initiatives taken by TSSPDCL include setting up of facilities for tracking applications for a new service connection and complaint resolution, and deployment of technologies such as geographic information system mapping, automatic meter reading and SCADA. Further, for industrial consumers, the discom has created virtual bank accounts to ease the bill payment process and launched a single window cell for new industrial consumers for granting clearances. It also undertakes MRI analysis of the consumer’s electricity network to detect energy pilferages. Further, the discom is implementing the Rural High Voltage Distribution System Project for 94,085 agricultural pumps. The discom is also implementing the Smart Grid Pilot Project in Jeedimetla and Shapur Nagar sections in the Jeedimetla Industrial Area, Rangareddy North circle with 11,904 consumers. The project entails a cost of Rs 418.20 and is scheduled to be commissioned by September 2017.

In light of its network expansion plans, reduction in losses, and timely implementation of a host of government schemes and IT initiatives, Telangana’s distribution segment seems to have a bright future.

December 2017
Southern Power Distribution Company of Telangana Limited (TSSPDCL) is one of the country’s newest and best performing [...]
More 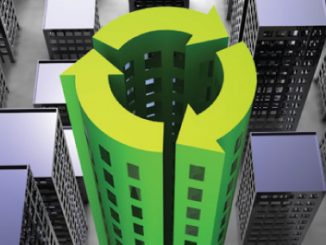 Building Efficiency
ECBC 2017 expected to reduce energy use by half

October 2017
The building sector accounts for significant electricity consumption and is one of the largest contributors to greenhouse [...]
More

July 2017
Even as New York and London were lighting up in the late nineteenth century, the first display [...]
More