The government’s policy think tank, the National Institution for Transforming India, also called NITI Aayog, released the draft version of the National Energy Policy (NEP) on June 27, 2017. Broadly, the NEP is expected to ensure wider consumer choices, provide a level-playing field and a competitive economy, and help achieve energy security by 2040. Once adopted, this new policy will replace the Integrated Energy Policy prepared by the erstwhile Planning Commission (which was replaced by NITI Aayog in 2015) and approved by the previous government in 2008. The idea is to chart out a new agenda consistent with emerging trends in the energy world. Anil Kumar Jain, additional secretary, NITI Aayog, says, “The NEP is not just about dealing with all of India’s energy resources, but also about addressing collateral issues such as clean energy, international engagement, technology and energy efficiency.”

The draft policy focuses on two time horizons: short term (up to 2022) and medium term (up to 2040). It proposes early actions to achieve the government’s energy sector targets for 2022 and India’s Intended Nationally Determined Contributions (NDCs) committed for 2030 under the UNFCCC (United Nations Framework Convention on Climate Change). The policy recognises that bolder interventions are required to modernise the country’s energy sector in the medium term. The draft NEP is structured into five broad sections covering energy demand, supply (both fossil fuel and non-fossil fuel-based sources), facilitating mechanisms (such as regulators, infrastructure, technology, human resources and overseas engagements), air quality and India’s Vision 2040.

The NEP proposes actions to meet the four main objectives – access at affordable prices, improved security and independence, greater sustainability, and economic growth. However, these goals may not be in harmony with one another. In India, sustainability and energy security are closely linked. The country’s fossil fuel requirements, accounting for about 90 per cent of its commercial primary energy supply, are increasingly being met by imports. This implies that reducing fossil fuel consumption will help achieve both the goals of sustainability and energy security. Therefore, emphasis is laid on energy efficiency and renewable energy. However, as long as fossil fuels remain the cheapest source of energy, the objective of access to affordable energy will be in conflict with the goals of sustainability and energy security. The NEP acknowledges that the country still has a long way to go to attain its energy security objective, with nearly 304 million Indians without access to electricity and 500 million people still dependent on solid biomass for cooking.

The NEP recommendations are underpinned by modelling projections using India Energy Security Scenarios (IESS) 2047, a tool developed by NITI Aayog for the purpose. The report presents the results of two scenarios – the business-as-usual (BAU) or baseline scenario and the NITI Ambition Scenario (NAS) 2040 -generated using IESS. The latter refers to the country’s expected energy status by 2040 following an ambitious path. For energy demand, the IESS 2047 is used to construct two pathways based on two levels of energy efficiency and technology interventions. On the supply side, the two pathways are mapped based on a transition towards cleaner sources of energy and greater indigenous resource production. The NAS assumes that India’s recently announced development goals such as Housing for All, Power for All and 100 Smart Cities, and the target of 175 GW of renewable energy capacity will be met by 2022. The IESS captures the country’s growth trajectory post the achievement of these ambitious targets.

The key assumptions and implications across the two scenarios are as follows:

The draft NEP recommends increased commerciality for energy producers, transporters and distributors, and envisions a reduction in prices through efficient markets. Transforming the energy sector on commercial principles is expected to yield attractive returns, which in turn will drive huge private investments into the sector. As per the International Energy Agency, the investment requirement in the electricity sector is estimated at $3.6 trillion during the period 2015-40. The draft NEP notes that a significant transformation of the electricity sector could have been achieved if it had strictly followed the path charted by the Electricity Act, 2003. Fuel supply issues, the state utilities’ bureaucratic mindset and sub-optimal regulatory decision making have denied the sector its potential gains. Since 2003, the government has had to bail out discoms three times, the latest initiative being the Ujwal Discom Assurance Yojana. Today, the sector is faced with the paradoxical situation of having a huge unmet demand and gross underutilisation of existing generation capacity at the same time.

The root cause of repeated episodes of discom bankruptcy is the lack of commercial pressure on the discoms. This can be achieved through the separation of electricity distribution from grid ownership. Discoms could continue to own the grid while private players could undertake the sale of electricity. A related proposal for content-carriage separation has been made in the proposed amendments to the Electricity Act. However, it is yet to be tabled in Parliament. Once content-carriage separation is implemented, customers will have the freedom to choose their electricity distributor while discoms will collect a fee from the distributors for giving open access to the grid. To resolve the issue of cross-subsidy, industrial consumers may be taxed for the purchase of electricity, which may be used to subsidise vulnerable consumers through direct benefit transfer (DBT).

For this, the policy proposes that central government utilities may partner with state discoms (either directly or along with private players) to forge forward integration. Meanwhile, the state regulators need to be strengthened to deliver effective decisions on tariffs and dispute settlement, among other issues.

New business models such as renewable electricity, smart grids, demand side management and energy efficiency are expected to impact the infrastructure and revenues of power sector operators. A stable and forward-looking policy is essential to ensure that investments flow into these segments. In the coal sector, the NEP calls for an in-depth assessment of coal reserves, optimum mining, efficient use and an “appropriate reckoning” of the role of coal in the energy mix. Coal India Limited (CIL) is expected to remain the key coal supplier in the immediate future. It is currently working to achieve the 1 bt production target by 2019. However, the policy notes that with subdued demand for coal (with power demand growing at only 5 per cent), this may not be required and may lead to stranded capacity. Thus the coal sector must, be allowed to respond to demand autonomously, and not pursue a target-led strategy. 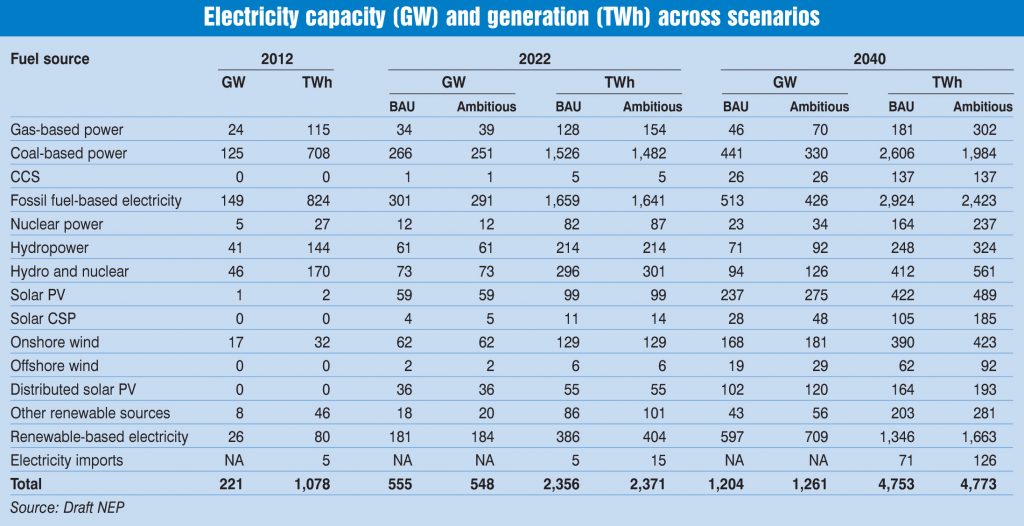 In addition, a change is recommended in the present policy of pass-through of coal prices in the power sector (resulting in coal supplies to power companies at subsidised rates) with a move towards market pricing. The issue of unmet coal demand of power plants with fuel supply agreements needs to be resolved so that these plants are able to improve their plant load factors. The issue of coal supply to stranded power plants must be addressed on priority to gain benefits from the investment already incurred. To address environmental concerns, the policy calls for phasing out old, inefficient coal-fired power plants and encourages the use of clean coal technologies, including coal washing and gasification for power generation (using the integrated gasification combined cycle method). It recommends that India join the ongoing international research on carbon capture and storage (CCS) technology through the consortium approach. Currently, the coal economy is run almost entirely through administrative allocation, except a small e-auction market. In the medium to long run, two measures have been suggested to move away from the current opaque coal economy to greater competition. The first is to corporatise CIL’s seven subsidiaries into independent companies and allow them to compete in an open coal market. The second is to ensure that production from new mines comes progressively from the private sector. This calls for comprehensive reforms in coal block allocation on commercial lines. In fact, this is likely to result in a substantial reduction in coal prices and the country may even become an exporter of coal. In case there is an adverse impact on electricity prices paid by vulnerable customers, it can be reversed through the DBT of subsidies.

The policy calls for instituting a fully empowered independent coal regulator immediately. It also recommends that the Petroleum and Natural Gas Regulatory Board be given regulatory control over certain aspects of the upstream petroleum sector as well. Given the expected rise in renewable energy capacity in the medium term, significant policy actions are required across the entire value chain of generation, transmission and distribution. As renewable technologies mature, they are expected to support transmission and balancing concerns on their own. The NEP lays emphasis on two demand-side interventions – energy efficiency and conservation – to reduce energy usage to meet India’s NDCs. For this, it suggests empowering the Bureau of Energy Efficiency to implement the Energy Conservation Act, 2011 more effectively across all energy consuming sectors. There is also a need to mandate energy efficiency measures with tighter provisions and introduce fiscal measures to incentivise the adoption of energy-efficient methods.

While the first draft of the NEP was ready for public discussion in March 2017 after one and a half years of consultations with various think tanks, it was held back as a few ministries raised concerns over some of its provisions with the Prime Minister’s Office. Despite elaborate consultations and deliberations, a consensus has not been reached between the planning body and the stakeholder ministries. Some of the contentious issues are freeing the coal sector from price control and corporatising CIL’s subsidiaries.  Piyush Goyal, minister of state (independent charge) for power, coal, new and renewable energy and mines, has until recently stated that CIL would not be split and would continue to operate as a single entity as of now. The actual implementation of the NEP proposals would have to overcome resistance from the incumbent entities. It remains to be seen if the final version of the NEP is watered down or it is able to build a consensus among the stakeholders.

Despite the challenges, the period up to 2040 is expected to witness a significant uptake of renewable energy, a major reduction in energy intensity, doubling of per capita energy consumption, and tripling of per capita electricity consumption. The planning body has made some far-reaching reform recommendations, which could change the future landscape of the energy sector. In particular, reforms pertaining to liberalising the coal and electricity sectors and freeing them from subsidies and price control will help in the overall sector development.