In recent years, studies have identified huge energy efficiency potential in electric motors and motor systems, with many of the savings options showing very short payback times and high cost effectiveness. Industrial plants can avoid unnecessary increases in energy consumption, maintenance and costs by selecting motors that are well suited to their applications and making sure that they are well maintained.

Alternating current (AC) motors are the most widely used in the industry. The preference for AC motors is driven by their simplicity, low cost and efficiency. There are two primary types of AC motors – induction (also referred to as asynchronous) and synchronous. With the exception of wound-rotor motors, which have slip rings, the rotors of induction motors are not physically connected to any external circuits; instead, the excitation current is induced by a magnetic field. In synchronous rotors, the excitation current is fed directly to the rotor by means of brushes and slip rings or a rectifier bridge (brushless excitation). Induction motors are widely used because of their simple design, rugged construction, relatively low cost and long operating life. Synchronous motors, on the other hand, are used in more specialised applications.

Despite the predominance of three-phase AC motors, direct current (DC) motors are advantageous for certain industrial applications and still widely used. Their advantages include excellent speed control and the ability to provide high torque at low speeds. However, the majority of DC motors use brushes to transfer electrical power to the motor armature. Brush assemblies not only require a larger motor, but can also increase maintenance requirements. As batteries supply direct current, DC motors have an advantage in applications in which the motor is supplied by a DC bus as part of an uninterruptible power system. Although these applications are somewhat specialised, they could increase as the industry becomes more sensitive to power quality problems and more aware of the high cost of interruptions in production.

Energy efficient motors (EEMs) have been designed specifically to increase operating efficiency as compared to motors of standard design. EEMs generally have longer insulation and bearing lives, lower heat output and less vibration. In addition, they are often more tolerant of overload conditions and phase imbalance. Even though standard motors operate efficiently, with typical efficiencies ranging from 83 per cent to 92 per cent, EEMs perform significantly better. An efficiency gain of 92-94 per cent results in a 25 per cent reduction in losses.

In India, the Bureau of Indian Standards defines the standards for energy efficient three-phase squirrel cage induction motors in Indian Standards (IS):12615-2011. Since June 30, 2011, the industry has been following the second revision of the IS:12615-2011 standards based on the International Electrotechnical Commission’s (IEC) 60034-30 standards.

Like the IEC 60034-30 standards, the IS:12615-2011 standards also classify motors into three categories: IE1 for denoting standard efficiency, IE2 for high efficiency and IE3 for premium efficiency.

However, the motor ratings are defined from 0.37 to 375 kW in two-pole, four-pole and six-pole configurations. The IS/IEC 60034-1:2004 specifies tolerance limits for various performance values of motors. The new Indian Standards had initially mandated that the efficiency performance value of motors would be IE2. However, a later clause stipulated that from January 31, 2014, IE3 would serve as the efficiency performance value. However, when these motors are used with variable frequency drives (VFDs), they shall conform to IE2 values of efficiency. The standard also reserves an IE4 class (super premium efficiency) for the future. 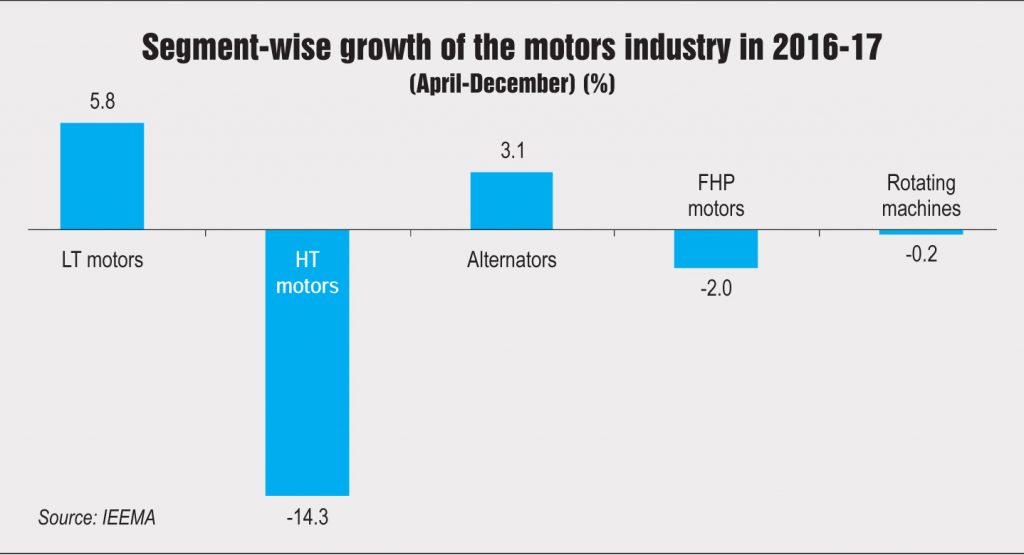 Although the industry is shifting to the IE3 efficiency class of motors, the adoption of this standard is not widespread yet. IE2 motors are being widely used and a complete transition to IE3 is under way. According to a quality control order by the government in January 2017, the minimum energy performance standards for line-operated three-phase induction motors in India shall be IE2 class, applicable from October 2017.

Even though the use of IE3 standard motors demands increased initial capital expenditure, the resultant increase in energy efficiency can help recover the incremental investment incurred in the deployment of IE3 motors within 6-12 months, depending on the motor ratings. Careful selection of an EEM is very important while replacing a standard motor with an EEM.

The installation of variable control devices in industrial applications has been a key area of performance improvement for motors. Many applications that are currently served by constant-speed motors are well suited for variable speed control. For example, in many pumping and fan system applications, flow is controlled by using restrictive devices such as throttling valves or dampers or through the use of recirculation bypass methods. Although these flow control methods have advantages, speed control is often a more efficient and cost-effective option for many systems. Similarly, in many material handling systems, adjustable speed drives can increase system efficiency and improve system reliability. For example, in many conveyor systems, lines are controlled by energising and de-energising a series of motors. 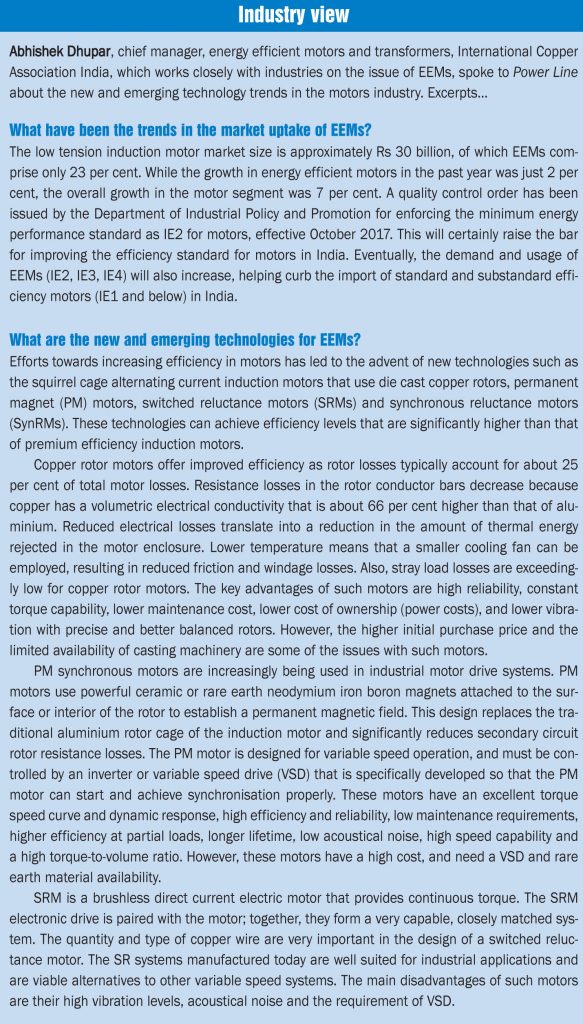 Another common method of controlling speed is by using induction motors combined with pulse-width modulated VFDs. Combining an in-service motor with a VFD provides facilities with an effective speed control technology that does not require the use of a different type of motor.

VFDs are used in a wide range of applications, including fluid (gas and liquid) systems, material handling systems, and machining and fabrication processes. These drives can be incorporated into closed-loop control systems, and VFD speed adjustment ratios are similar to those of other speed control systems. The principal advantage of VFDs is improved operational efficiency, which means substantial cost savings in many motor systems. If they are used in place of mechanical drive options, VFDs can also improve system reliability by removing potential failure modes. They require less maintenance because they have fewer components.

However, not all in-service induction motors can be combined with a VFD; engineers should evaluate motors and load requirements on a case-by-case basis to see if such combinations are feasible. Misapplying VFDs to in-service motors can hinder expected energy savings from materialising, or can quickly cause motor failures. Moreover, some motor-driven machines have speed-dependent lubrication systems, and these must be considered in any assessment associated with changes in speed.

Multiple-speed motors are another speed control option. AC motors can be built to operate at different, discrete speeds using two principal approaches. First, these motors can be constructed with multiple windings, one for each speed. Such motors are usually two speed, but they can be built to run at three or four speeds. Motors with different sets of windings (such as cooling tower fan drive motors) are used in many cooling system applications so that they can operate at different speeds when ambient conditions (temperature and/or humidity) change. 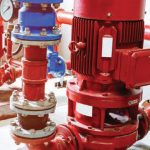 Motors use the maximum energy at the start-up stage. Therefore, aside from installing EEMs, energy savings can be achieved by selecting energy efficient methods for starting up motors. The level of current during start-up can stress motor components and cause power quality issues in a plant’s electrical systems. In order to prevent damage to the windings due to the high start-up current flow, different types of methods are employed for starting motors. For example, direct-on-line (DOL) is the simplest and the most commonly used cost-effective method of starting induction motors. This gives the highest possible torque and is suitable for stable supplies as well as mechanically stiff and well-dimensioned shaft systems. Large motors and motors that start and stop frequently, or have some kind of control system, normally use a DOL starter. Soft starters, based on semiconductors, initially reduce the motor voltage, resulting in lower motor torque via a power circuit and a control circuit. The idea behind a soft start is to gradually allow the motor current to rise until the motor reaches its steady state.

With advances in microelectronics, another key technology trend has been the use of digital drives with embedded intelligence, which are capable of actively monitoring and controlling a wide range of motor parameters. Microcomputers embedded in motors ensure that the motor is running in its optimal operating state by monitoring voltage, current and rotational frequency to estimate the load on the motor. They can also be used for soft starting, overload monitoring, precise torque adjustments and positioning, as well as many other advanced functions. One of the benefits of built-in microcomputers compared to external electronic control units is their ability to adjust the control parameters in real time with very high responsiveness to load fluctuation, keeping self-excited vibration associated with delays in control to a minimum. As motors become more and more intelligent, they will increasingly function as sensors that process information about their surroundings. This information can then be collected and analysed by internet-of-things systems to create new added value.

Apart from these measures, proper maintenance of motor and drive systems is another area for improving performance. By minimising the risk of unplanned downtime, effective maintenance programmes can help plants avoid costly disruptions in production. Inspections of motor and drive system components should be based on such factors as runtime, environmental conditions, consequences of failure, and so on. Often, these inspections can and should be combined with cleaning to remove contaminants from the motor. 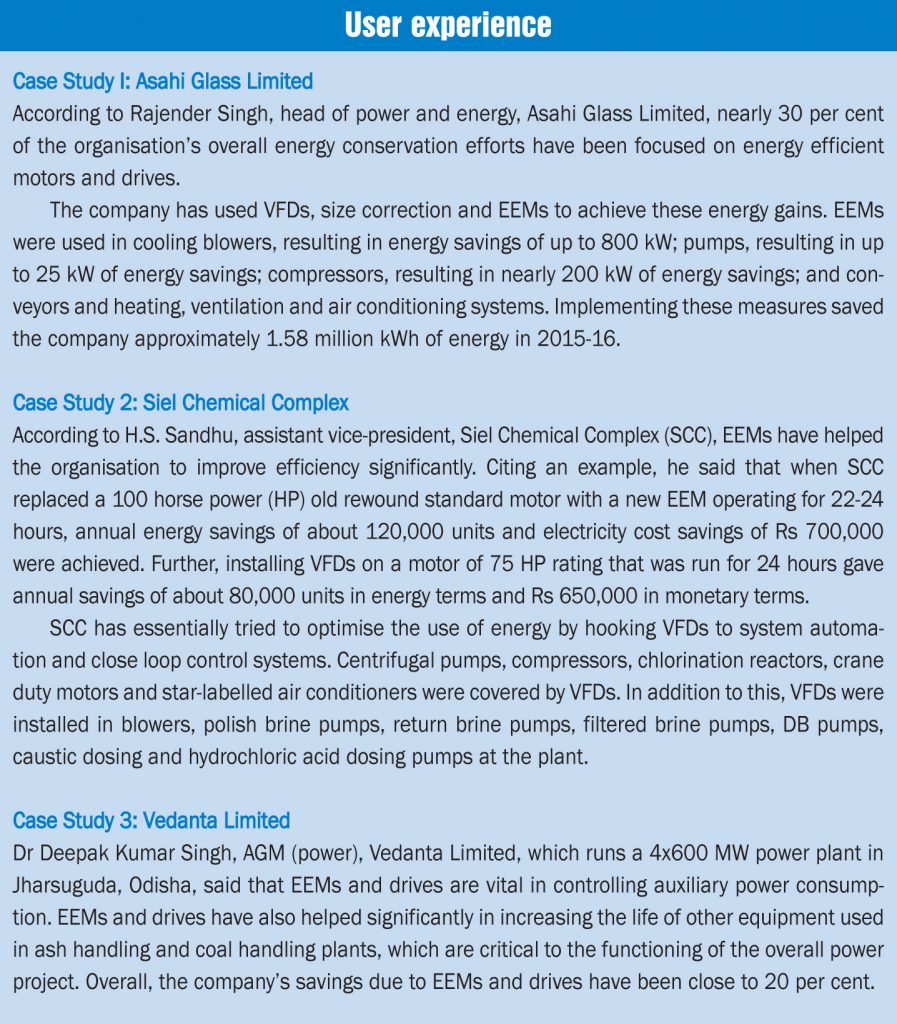 While the advantages of EEMs are well established, there are a number of challenges that are hampering their uptake. Lack of access to capital and higher initial costs of EEMs are the key amongst them. EEMs lower electricity consumption significantly, which, in turn, leads to reduced electricity bills and offer almost constant efficiency between 65 and 100 per cent load ranges. They also are more tolerant to thermal and electrical stresses, thus reducing downtime, all with an attractively low payback period.

October 3, 2017
Industries are increasingly realising the need to become self-sufficient in meeting their energy needs and also looking [...]
More 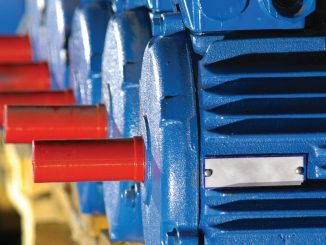