Effective utilTransitioning to a resource-efficient and circular economy is the key to achieving the country’s sustainable development goals. In line with this, concerted efforts have been made in the power sector to ensure effective utilisation of fly ash, a harmful by-product of pulverised coal. As a result, fly ash has found multiple use cases in different segments of the economy today.

Over the past two decades, there has been a significant increase in fly ash utilisation, from 11.68 per cent in 1998-99 to 63.28 per cent in 2016-17. Today, fly ash is used for various purposes such as construction of roads/highways/flyovers, reclamation of low-lying areas, backfilling and stowing of mines, wasteland development and production of Portland cement concrete.

Of the total 169.25 million tonnes (mt) of fly ash generated in 2016-17, around 63.28 per cent was utilised by various industries, as against 60.8 per cent during 2015-16. While the absolute generation remained almost the same, the utilisation percentage witnessed a marginal increase.

In 2016-17, the maximum utilisation of fly ash, that is, 23.98 per cent of the total fly ash generated, was in the cement sector. Further, 8.81 per cent was used in making bricks and tiles, 7.02 per cent in raising ash dyke and 6.96 per cent in mine filling. Other applications of fly ash included reclamation of low-lying areas and construction of roads and embankments. It can also be utilised in the agriculture and the hydropower sectors. 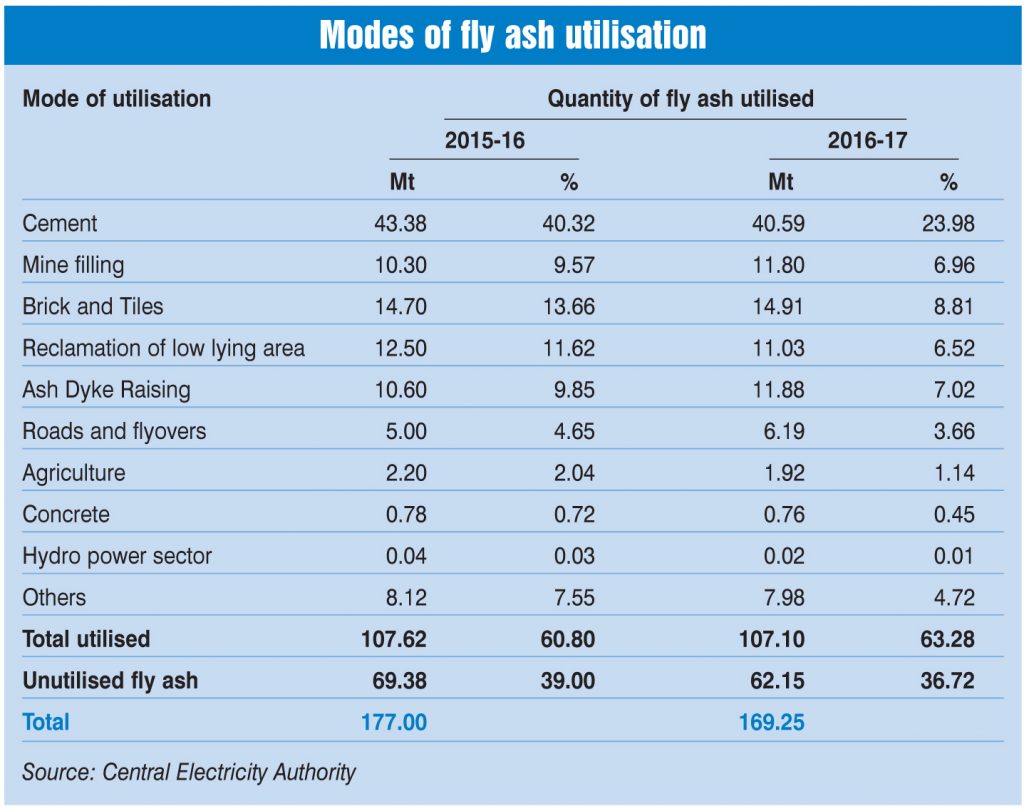 Use in cement production

With a utilisation of almost 40.59 mt, cement is the largest consumer of fly ash in India. The by-product is used by the cement industry as a pozzolanic material in the manufacturing of Portland Pozzolana cement (PPC) to replace the ordinary Portland cement, or as an ingredient in cement concrete. Addition of fly ash to the concrete mix can provide durability to reinforced structures such as buildings and bridges.

Fly ash use in cement concrete improves workability and impermeability, increases resistance to moisture and harmful gases, and strengthens the concrete mass. Fly ash provides a partial replacement of cement. Fly ash generates considerably less heat with early stages, thereby preventing thermal cracking and premature deterioration of the structure. It provides the same strength as cement. The use of fly ash in cement concrete reduces the requirement of cement and raw materials (such as limestone and coal), thus lowering its associated costs. Even on the environmental front, since fly ash displaces cement to a certain extent, it eliminates greenhouse gas emissions.

Use of fly ash as bricks

During 2016-17, around 11.8 mt of fly ash was used as bricks for construction. The production of fly ash-based bricks received an impetus in 2016 when the government made it mandatory for all builders to meet 50 per cent of their brick requirement in government buildings from fly ash bricks. Fly ash bricks are increasingly being preferred for modern construction and have three times more strength than conventional bricks. These bricks serve as an environment-friendly building product as they are less energy intensive compared to clay bricks and require less mortar in brick-work. In India, NTPC Limited has been at the forefront of fly ash utilisation and has manufactured more than 5.4 million ash bricks for its various thermal power stations. NTPC townships at Simhadri, Sipat, Faridabad and Talcher-Kaniha have been constructed exclusively with fly ash bricks. In addition, a large number of houses are being constructed with these bricks by private players in various metro cities such as Pune and Visakhapatnam.

Construction of roads and embankments

For many years, fly ash has been used in road construction as a fill material and in more recent years as a binder and aggregate in hydraulically bound materials. Since fly ash is lightweight in nature, it leads to savings in material and reduces settlement in the underlying soils. The use of fly ash in the construction of national highways results in the reduction of construction costs by 10-20 per cent.

The use of fly ash as a fill material also helps reduce transportation costs. If the lead distance is less, considerable savings in the construction cost can be achieved. Further, pavement construction with fly ash results in significant savings in road aggregate costs. In addition, the high permeability of fly ash ensures free and efficient drainage. In India, the second Nizamuddin bridge approach road embankment and the Okhla Flyover bridge and Hanuman Setu embankments are successful examples of fly ash utilisation for embankments and flyovers.

Backfilling of mine voids is mandatory to avoid subsequent ground stability problems such as subsidence. Traditionally, mill tailings and river sand have been used extensively in the country as mine backfilling materials. However, stringent regulations, unsustainable sand mining practices, and the unavailability of river sand have created problems for the mining industry. Fly ash has emerged as an alternative engineering material in response to these challenges. This also results in the conservation of top fertile soil and the river sand.

Various studies have been undertaken to understand the soil properties as influenced by fly ash application. It may be surprising but mixing fly ash in soil can increase the production of crops. Fly ash has proved to be a resourceful material and can be effectively utilised as a soil modifier in large quantities for converting wasteland into agriculturally productive land. Fly ash utilisation in agriculture offers cost savings from the reduced use of chemical fertilisers, while working as a supplement nutrient for degraded soils. However, despite these benefits, the current fly ash utilisation levels in the agricultural sector are quite low.

Even though fly ash utilisation in the country has increased considerably, 100 per cent utilisation is still a long way away. The use of fly ash in the construction of railway embankments has raised concerns regarding passenger safety. These need to be addressed by carrying out relevant studies. Further, technological advancement is required to ensure the development of dry fly ash collection, storage and disposal facilities so that fly ash in the dry form could be made available to users, which will be especially useful for the cement industry. Another issue is the high transportation cost of fly ash. To this end, the Cement Manufacturers’ Association has recommended that transportation costs for up to 100 km from thermal power plants should be brought down to zero for the cement industry and cement companies may be charged the differential transportation cost beyond 100 km. Further, the goods and services tax on PPC and Portland slag cement needs to be reduced to promote the uptake of fly ash in the industry.

There is also a need to encourage industry–institute interactions for entrepreneur development, to create awareness, and to organise training programmes and workshops to increase usage. Over the past two decades, fly ash has proved to be a resourceful material, providing economic and environmental benefits in all modes of utilisation. 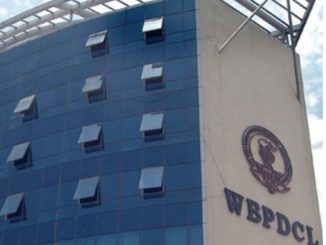 April 2, 2017
West Bengal’s energy availability in the past five years or so has seen a significant improvement with [...]
More