The country’s dependence on coal for meeting its energy needs has resulted in the generation of huge quantities of ash over the years. However, ash utilisation levels have remained dismal. Of the total installed capacity of over 330 GW, nearly 60 per cent is coal based, the majority of which comprises domestic coal with a high ash content of 30–35 per cent. It is estimated that thermal power plants (TPPs) generate 200 million tonnes (mt) of ash annually, which is likely to reach 300 mt by 2022. Around 90 per cent of ash generated by power plants is in the form of fly ash and the remaining is bottom ash or pond ash.

In order to mitigate the environmental hazards posed by fly ash, the Ministry of Environment, Forest and Climate Change (MoEFCC) has issued various notifications on fly ash utilisation. The first notification was issued in 1999, which has been amended many times. The latest amended notification, dated January 25, 2016 stipulates 100 per cent utilisation of fly ash by TPPs by December 2017. Earlier, in 2009, the MoEFCC had prescribed ash utilisation targets in a phased manner over a period of five years till 2014. However, only one-third of the TPPS were able to meet the target. Out of 151 TPPs surveyed by the Central Electricity Authority (CEA), only 54 power stations achieved the fly ash utilisation targets as of 2015-16.

According to the latest amendment, the TPP owner would have to bear the entire cost of ash transportation up to a radius of 100 km from the TPP. For  distances of more than 100 km and up to 300 km for road construction projects or for the manufacture of ash-based building products, the owner would share the cost equally with the user/construction agency. In addition, the notification states that it is mandatory to use fly ash-based products for all government schemes such as the Pradhan Mantri Gram Sadak Yojana, the Mahatma Gandhi National Rural Employment Guarantee Scheme and the Swachh Bharat Abhiyan.

Fly ash is collected through electrostatic precipitators installed in power plants while bottom ash falls through the furnace grating and is collected in a hopper. The pozzolanic property of fly ash makes it an excellent resource material for the construction industry. It can be used for the manufacture of cement, bricks, concrete blocks and high density interlocking blocks. These can be used in conjunction or as an alternative to conventional bricks by the construction industry. Another fly ash-based product is lightweight aggregate, which proves an excellent alternative to natural quarried aggregate. Fly ash aggregate is about 25 per cent lighter than natural aggregate and provides greater flexibility to builders during construction. It allows easier placing, compacting and finishing. Fly ash can also be used as a partial replacement to cement. Fine fly ash particles are collected from the banks of the electrostatic precipitators for this purpose. Meanwhile, bottom ash is frequently used in the construction of roads. 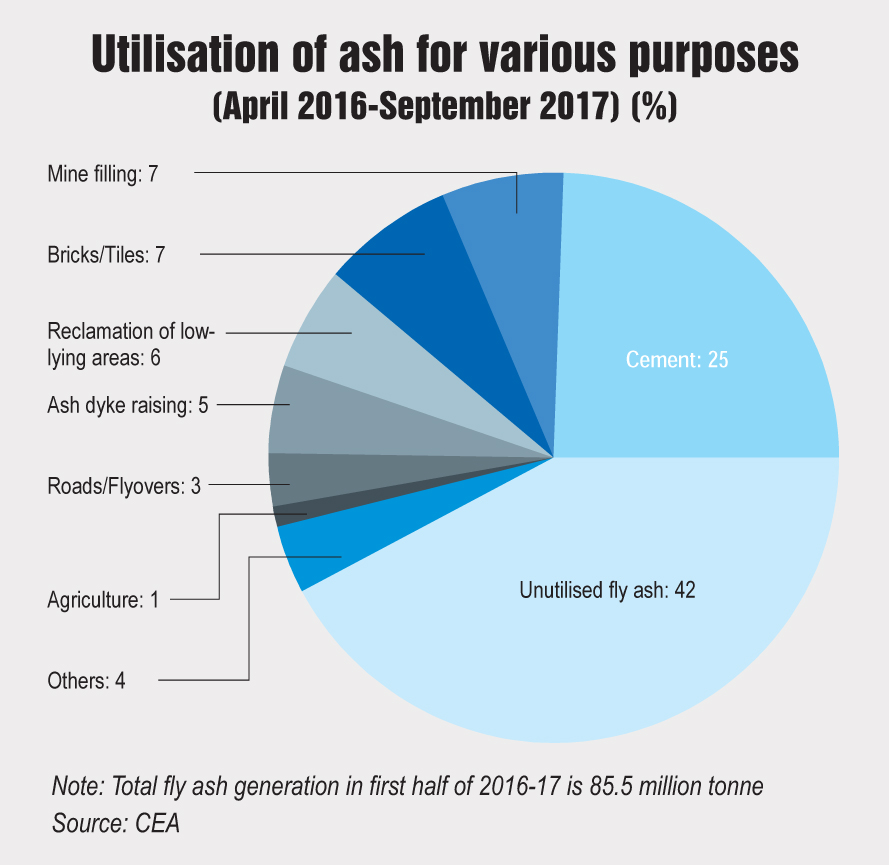 New initiatives and the way forward

The Ministry of Power (MoP) has outlined certain initiatives to monitor fly ash generation by TPPs and ensure compliance with environmental directives. To this end, the TPPs are required to upload the details of fly ash available with them on a monthly basis. A quarterly report of this data needs to be also submitted to NITI Aayog.

In addition, the MoP is developing a mobile application to connect fly ash generators and users. The proposed application will have details about the fly ash availability at TPPs, the location of plants and the facility to apply online for issues/supply of ash.

Going forward, concerted efforts are needed by all states to improve fly ash utilisation. The state governments need to promote fly ash utilisation in government construction programmes by including fly ash bricks in tender specifications, developing ash parks in designated industrial parks, and establishing storage facilities and quality testing procedures for ash-based products. The Maharashtra government has taken a lead in this regard and approved a policy for 100 per cent utilisation of fly ash generated by power plants for construction activities. Recently, Mahagenco Ash Management Services Limited  invited brick kiln owners to set up their units near its TPP in Koradi. Further, the CEA has suggested that TPP operators should conduct awareness programmes on the use of fly ash for the manufacture of bricks and cement in rural areas in the plant vicinity as a part of their corporate social responsibility.

Besides, there is significant potential for ash utilisation in the manufacture of bricks, building products and construction material for roads/highways, which needs to be exploited further. The concerned agencies, including the National Highways Authority of India and housing development authorities, need to be sensitised about the utilisation of fly ash so that it can be factored in at the tendering stage itself.

In addition, TPP operators are looking at making technical modifications to ensure the collection, storage and disposal of fly ash in dry form. The key driver for this is the new environmental norm that restricts water consumption at existing and new power plants.

As per the Centre for Fly Ash Research and Management, ash generation is projected to increase to 500 mt by 2022 and further to 1,000 mt by 2032 while the utilisation levels are projected to be 45 per cent and 65 per cent, if the current ash management practices continue. In order to achieve 100 per cent utilisation, there is a need for stricter compliance monitoring by the authorities along with committed efforts by TPP owners and other stakeholders.

Effective utilTransitioning to a resource-efficient and circular economy is the key to achieving the country’s sustainable development goals. In line with this, concerted efforts have been made in the power sector to ensure effective utilisation […]

Generation Shift: Increasing share of renewables in the installed capacity