Indonesia’s state-owned PT Peru­sahaan Listrik Negara (PT PLN) dominates the country’s power sector, holding a monopoly in the transmission sector and functioning as a system operator. PT PLN issues a 10-year Electricity Power Supply Business Plan, known as Rencana Us­aha Penyediaan Tenaga Listrik (RUPTL), to guide the development of po­­­wer infrastructure to meet the country’s electricity demand. Recently, the uti­lity unveiled its latest RUPTL, for 2021-30, wherein, for the first time, the major­ity of power generation projects to be de­veloped are renewable energy based, accounting for 51.6 per cent of the 40,575 MW of power generation projects plann­ed. The latest RUPTL forecasts that the electricity demand growth in the next de­cade will hover around 4.9 per cent per annum, lower than the average 6.4 per cent growth projections under the previous RUPTL (2019-28).

Renewable energy is becoming increasingly attractive in Indonesia due to its benefits. It supports the government’s en­vironmental policy around carbon emissions and enables project deployment in a more decentralised way. Hence, trans­mi­ssion infrastructure by default has become a key focus area for the utility, which aims to integrate this upcoming renewable energy. The new RUPTL envisages the construction of over 47,723 ckt km of transmission lines and substations with 76,662 MVA of capacity by 2030.

Currently, transmission projects are de­ve­loped by PLN and the interconnection related to independent power producer (IPP)-owned power plants can be carri­ed out by relevant IPPs, depending on projects and PLN’s requirements. The new RUPTL marks a change in this ap­proach and chalks out options for transmission projects to be carried out by the private sector under certain business schemes, such as build-operate-transfer (BOT), build-lease-transfer (BLT) or po­w­er wheeling.

As per the new electricity plan, PLN en­visages to invest around IDR 213 trillion in the construction of transmission lines and substations between 2021 and 2030.

The Indonesian transmission system has eight interconnected networks and 600 isolated grids. The grids of Java, Bali and Madura are interconnected via 500 kV and 150 kV lines, the Sumatra grid is in­terlinked with other regions via 275 kV and 150 kV lines, and the Central Kali­ma­nt­an, South Kalimantan and East Ka­li­mantan grids are linked via a 150 kV line. West Kalimantan’s grid remains isolated from the networks of other provinces. 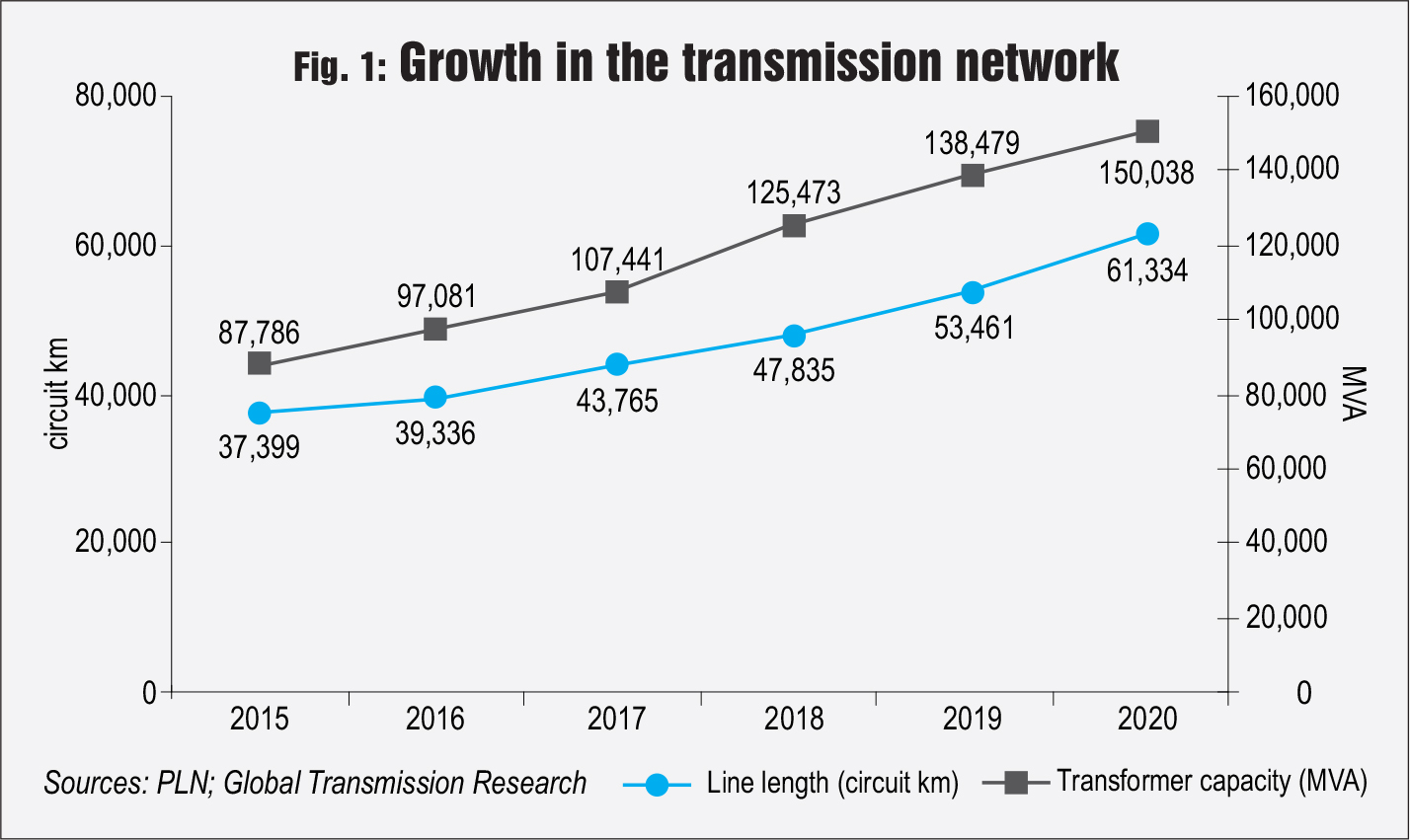 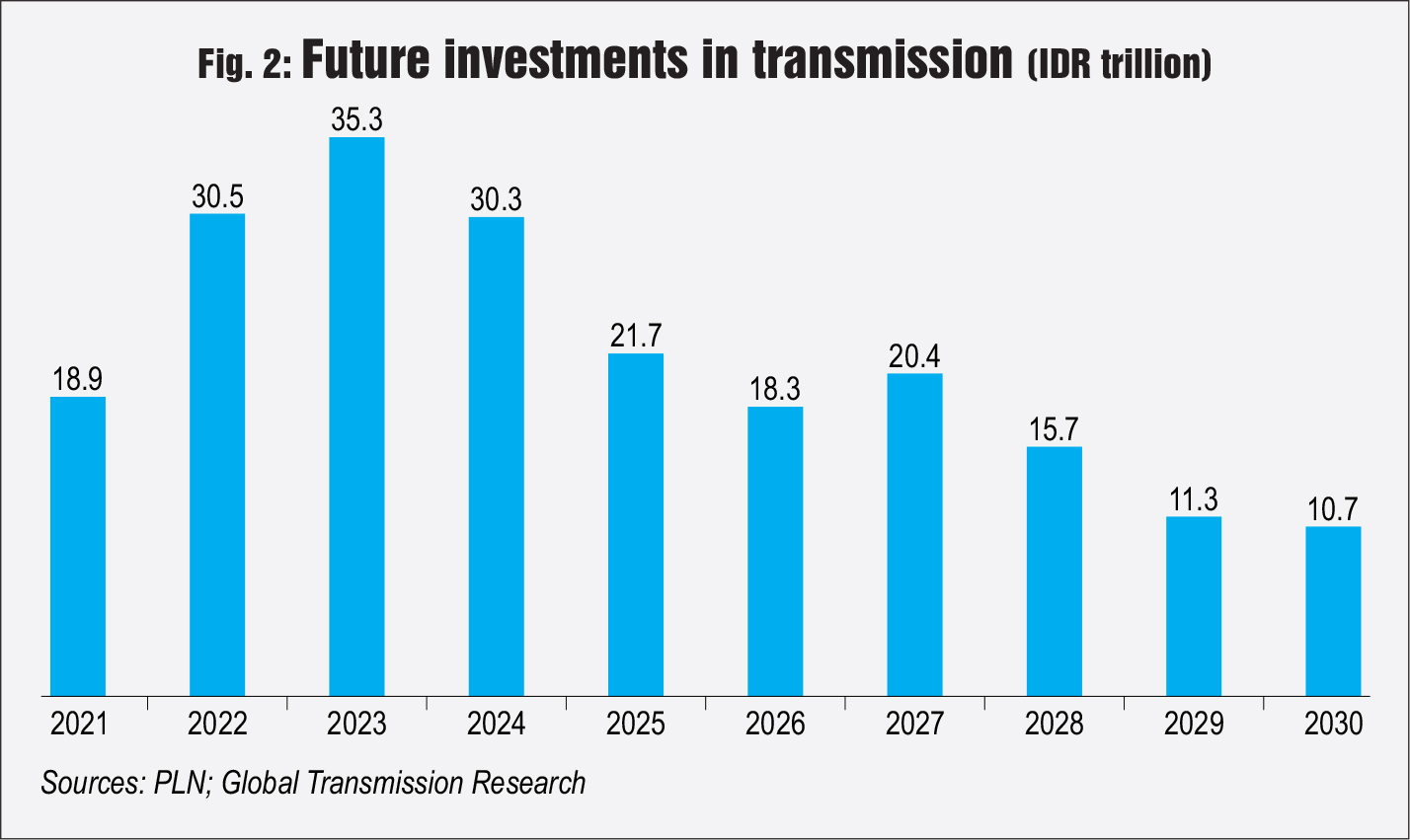 The network losses for PLN improved from 9.32 per cent in 2019 to 9.15 per cent in 2020, consisting of transmission losses of 2.08 per cent and distribution losses of 7.22 per cent. The utility attributes the im­­provement to investments and repairs in the PLN electricity system, including power plants, substations, and transmission and distribution networks, which have been carried out in recent years. Mean­while, in 2020, the consolidated System Average Interruption Duration Index (SAIDI) was reduced to 763.13 minutes per customer, faring better than the 1,136.72 minutes per customer recorded in 2019. The consolidated System Average Interruption Frequency Index (SAIFI) was 9.25 times per customer, marking an improvement over 2019, when it stood at 11.51 times per customer. The  major cause of power interruption was distribution interruptions, especially those at fee­der facilities. 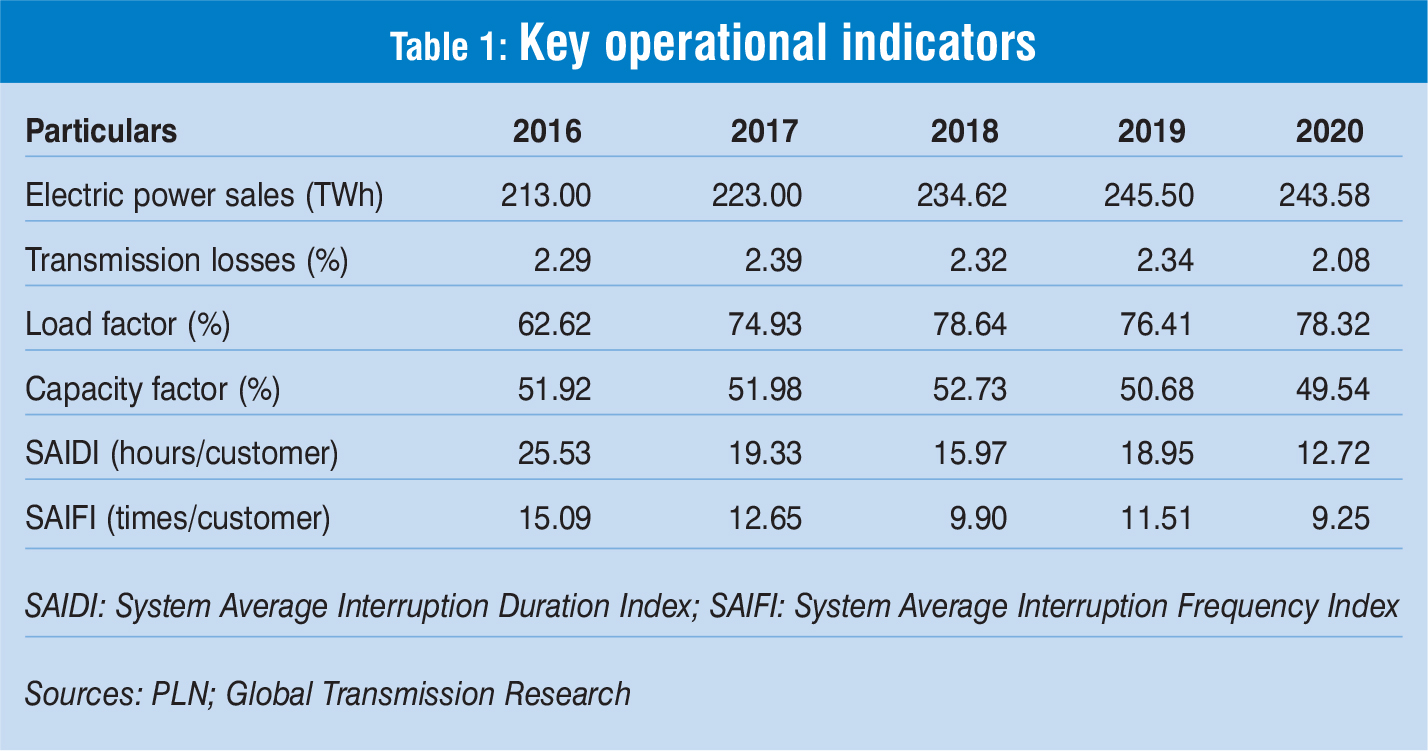 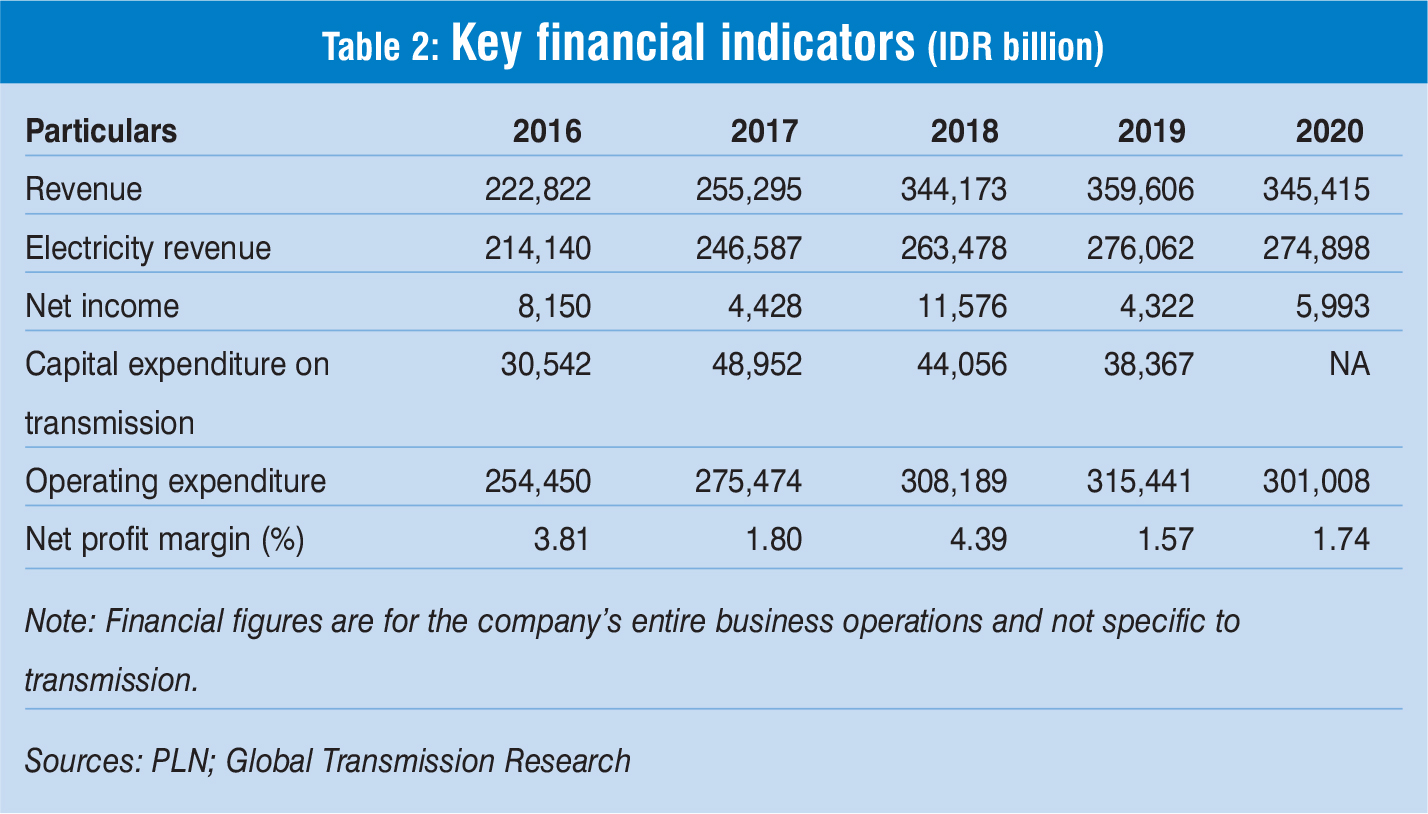 The latest RUPTL (2021-30) has opened up significant avenues for stakeholders in green power projects, smart grids and electric vehicles (EVs). It also intends to sp­eed up Indonesia’s energy transition towards net zero.

Over the next decade, PLN will focus on developing transmission systems at the 500 kV and 150 kV voltage levels in the Java-Bali system and 500 kV, 275 kV, 150 kV and 70 kV lines in the East Indonesia and Sumatra systems. The country is also part of the ASEAN power grid project, which aims to link 10 Southeast Asian countries. Under this, the Malaysian and Philippine grids are planned to be linked with that of Indonesia. PLN is working towards developing major interconnections such as the Peninsular Malaysia– Sumatra interconnector, the Batam– Sin­gapore interconnector, the East Sabah-East Kalimantan interconnector and the Singapore-Sumatra interconnector for improving the reliability of the transmission system. PLN is cooperating with Ma­laysia’s Sabah Electricity Sdn Bhd to evaluate the prospects of power trade bet­ween East Kalimantan and Sabah. The implementation of this link would bolster the case for a future extension from Borneo to Mindanao (the Philippines).

Another focus area for PLN is the development of the network system by investing in smart grids to create an efficient electric power regulation system, provide reliable electricity supply, and help in the utilisation of renewable energy so­urces. The roadmap to smart grid implementation entails pilot projects in the Surya Cipta Sarana Industrial Zone, Karawang, and Sumba Island, East Nusa Tenggara; and the development of a sm­art grid with advanced metering infrastructure (AMI) technology in a distribution area in Jakarta. Recently, PLN im­­­­ple­­mented a plan to develop a smart

mi­­cro grid in Mandalika, West Nusa Ten­ggara province, as well as on Sula­wesi Island. As per RUPTL 2021-30, PLN also plans to launch several pilot projects, which include the implementation of smart grids in industrial and business areas; installation of an automatic des­patch system; development of smart microgrids in areas with high renewable energy scope; implementation of smart grids with AMI technology in Jakarta, Bogor and Bali; and deployment of a di­gital substation along with an “E-mobility” platform for the existing EV charging stations of PLN.

PLN has set ambitious targets for the country’s power sector, especially for renewable energy. This would re­quire robust transmission infrastructure. Mo­re­over, the Indonesian government’s initiative to expand the generation ca­pa­­city to 40.6 GW by 2030 makes it im­perative for PLN to develop a well-built transmission infrastructure to support it. How­ever, significant critical support from the government will be required to achieve these goals, ranging from budgetary support to the requisite policy and regulatory framework. A small num­ber of transmission lines have been built by IPPs in remote areas to connect power plants to PLN substations but private sector investment is still needed. There is also potential for private sector investment in the unregulated, decentralised, mainly off-grid distribution options, which will be important for achieving universal and reliable el­ectrification.

Although the government has a record of making subsidy reimbursements to PLN, there have been delays in the disbursement of compensation income in the pa­st three years. Net, net, PLN’s success over the next decade will largely depend upon addressing investment issues and policy design aspects that are critical to the future of the sector. 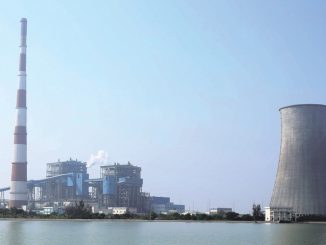 June 2017
At the time of the formation of Telangana state in 2014, the government had accorded utmost priority [...]
More 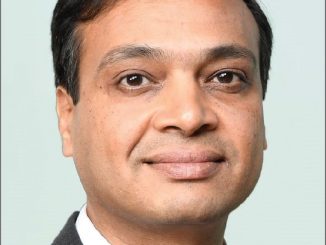 Interview with Prashant Jain
“Reliable power is a reality now”