While all the cross-border electricity trade (CBET) in South Asia currently takes place bilaterally, the region is gradually moving towards cross-border trilateral and multilateral power trade, and the regional market will be an important part of the transition. As a part of the regional power ma­r­ket, a regional power exchange in South Asia would benefit from the daily dema­nd diversities and sporadic demand-supply mismatches at the geographical level, for optimum utilisation of power resources in the region. A regional power market would also enable contracts on barter of power on a seasonal and hourly basis. At a recent webinar on “Establi­sh­ing a regional power market in South Asia” organised by USAID’s South Asia Re­gional Initiative for Energy Integra­ti­on programme, currently being implemented by Integrated Research and Ac­ti­on for Development, and Power Line, Pra­bal Adhikari, Nepal Electricity Autho­rity, Nepal; Dawa Chhoedron, Depart­me­­nt of Hydropower and Power Sys­te­ms, Ministry of Economic Affairs, Bhu­t­an; Stephen Dihwa, South African Power Pool Coordination Centre; Mohammad Hossain, Power Cell Division, Ministry of Power, Energy and Mineral Resources, Bangladesh; Rajesh K. Mediratta, Indian Energy Exchange; Dr M.N.S. Perera, Mi­nistry of Power, Sri Lanka; and Ghan­sh­yam Prasad, Ministry of Power, Gov­ern­ment of India, discussed the role regional power market would play in en­han­cing energy security, issues and cha­llenges, and the next steps. Excerpts fr­om the discussion…

Markets are important as they offer a lot of variety, foster competition and facilitate economic prices. Electricity is an essential commodity; hence, the market and the government try to maintain a balance so that there are no shortages. The prices shoot up in case of a shortage, and go down in case of a surplus, thus ensuring availability of sufficient power. Power markets allow transfer of power from surplus to deficit areas, resulting in social welfare maximisation. Power markets thus lead to optimal utilisation of power resources as and when available in the country. This inculcates efficiency of generators, and brings down prices substantially. Previously, CBET used to occur on a government-to-government basis. For example, Ba­ng­ladesh started buying power from India on a regulated basis and later swit­c­hed to competitive bidding in long-term contracts.

Maintaining energy security requires a diverse portfolio of power generation resources and a seasonal diversity that is complementary in nature, both of which are enabling factors in the South Asian region. The presence of abundant hy­dro­power in the Himalayan range can provide optimised grid balancing and peaking power in the region. Further, a larger network will provide opportunities for renewable energy such as solar- and wind-based power plants, which is also an aim of the Green Grids Initiative – One Sun One World One Grid. The utilisation of cost-effective renewable pow­er such as hydropower would ensure competitively priced electricity for the people in the region. The South Asian region has been witnessing natural cala­mities every year, and the regional integration will ensure energy security in these difficult times. Additionally, different parts of the South Asian region have surplus/deficit at different times of the year. A regional power market leads to pooling of supplies and demands, ultimately leading to the enhancement of energy security in the region by transferring of power from surplus to deficit ar­eas. Further, sharing of resources also re­du­ces the cost of operating the system.

While India has coal, gas and nuclear (albeit only 2 per cent) power capacities, hydropower development in the country has been tardy. Meanwhile, Bhutan and Nepal have substantial hydropower capacity and potential. India has been importing hydropower from Bh­utan for quite some time, under a memorandum of understanding (MoU) and other bilateral arrangements. Nepal has been im­porting power from India, but after the commissioning of the hydro­po­wer projects being implemented by SJVN Limi­ted in Nepal, it will be in a position to sell power to India.

The traditional method of power trade has been through the power purchase agreement route, the MoU route or the bilateral route. Various types of markets exist in India for electricity – long term, medium term and short term. India launched the green term-ahead market in Sep­tember 2020 and recently introdu­c­ed the green day-ahead market, ex­clu­sively for renewables. Exclusive markets for renewables are expected to cut fossil fuel-based generation and thus help in meeting the global targets of climate ch­ange by cutting fossil fuel emissions.

“The energy transition is happening across the world as we move from fossil to non-fossil fuels. With this energy transition, we must utilise the diversity of resources across South Asia to optimise our portfolios.” Ghanshyam Prasad, Joint Secretary, Ministry of Power, Government of India

There is also a sense of willingness among the countries in the region to provide a conducive environment for CBET. India has notified regulations for CBET and the procedures for designated authority. This is a significant development since India plays a pivotal role in the South Asian region, both geographically and economically. At the same time, Bhutan has also revised its sustainable hydropower development policy, with one of the objectives being to en­hance CBET through evolving and innovative market mechanisms.

The energy transition from fossil to non-fossil fuels is happening around the wo­rld. Hydro, pumped storage, solar, wind, biomass and some new technologies such as hydrogen are gaining traction. With this energy transition, the South Asian region must utilise the diversity of resources to optimise energy portfolios, and the regional power market is expected to play a vital role in this. The South As­ian countries, as signatories to the Pa­ris Climate Agreement of 2015, have co­m­mitted to reducing carbon emissions. Besides, more recently, at the COP26 climate summit at Glasglow, the countries committed to decarbonising their eco­no­mies and promoting renewable energy de­velopment. The countries aim to decarbonise their energy sector; however, an integrated approach for the South Asian region is lacking. To this end, a lot can be done by integrating the regional po­wer market. Trading is expected to ev­en­tually spill over from the existing bi­lateral mode to a multilateral mode and then will likely expand towards a regional power market.

“The key challenge facing Sri Lanka for cross-border trade is the lack of connectivity with other countries,
particularly India. Other challenges include regulatory and legal hurdles.” Dr M.N.S. Perera, Additional Secretary (Policy, Technical and Research), Ministry of Power, Sri Lanka

Various steps are being undertaken to promote CBET in the South Asian re­gi­on. Notably, India issued guidelines for CBET in 2016, which were superse­ded by other guidelines in 2018, and procedures for designated authority in Febru­ary 2021. However, several challenges still remain. The time taken for clearances remains a bottleneck. Other challenges include the hegemony of geopolitics and the lack of investments in the region. Besides, the guidelines and procedures need to be revised to match the latest developments. Provi­s­ions to re­vi­ew the guidelines and procedures every couple of years to make the necessary im­pro­vements are required.

“South Asia has a diverse generation mix and seasonal diversity, which offer an enabling environment for a regional power market. The challenges faced earlier in regional power trading in terms of policy and regulatory frameworks have been addressed to a large extent.” Mohammad Hossain, Director General, Power Cell Division, Ministry of Power, Energy and Mineral Resources, Bangladesh

The basic requirement for regional energy integration is cross-border interconnection. A mechanism for building, op­erating and maintaining such a large net­work spanning across countries nee­ds to be put in place. In the case of Sri La­n­ka, connectivity with other countries, particularly India, is a major hind­rance in CBET. The lack of adequate connectivity is attributable to a lack of funds and technical know-how. Apart from this, robust regulatory and monitoring frameworks, and settlement and dispute resolution mechanisms are necessary. Besides, parity among the member countries’ participation in the regional power pool is a must. A common regional grid code and a common regulatory framework are bo­th necessary, besides standard guideli­nes for im­plementation and a funding mo­dality for developing regional cross-border in-frastructure. With the growing interconnectedness of the power grids of various countries, a robust cyberse­curity mechanism for regional power markets beco­mes paramount .

“The basic requirement for regional energy integration is cross-border interconnection, and there needs to be a mechanism for building, operating and maintaining such a large network. A regulatory and monitoring framework, and settlement and dispute resolution mechanisms are also necessary.” Dawa Chhoedron, Chief Engineer, Power System Division, Department of Hydropower and Power Systems, Ministry of Economic Affairs, Bhutan

The stage is already set for CBET in South Asia, it only needs to be extended so that more participants get the benefits of the market. In April 2021, Nepal joined the energy exchange market in India. As of August 2021, the CBET with Nepal under the day-ahead market at the power exchan­ges stood at 250 MUs. Further, discussions are under way on including Bangla­desh and Bhutan. This will be a significant step towards the de­velopment of regional markets in So­uth Asia. Currently, India has only an energy market, and plans are under way for the launch of a capacity market once jurisdiction issues with the regulators get resolved. Furthermore, there will be fi­nancial markets for fostering an in­vestor-friendly environment, besides plans to introduce forwards and futures in the power sector. All these products are in the pipeline, besides the market-based economic despatch and ancillary services, which are being provided at regulated tariffs.

“To avoid a demand-supply mismatch, a regional power market is a good solution. It will enhance energy
security by pooling power demand and supply. Besides, reduction in electricity tariffs is possible with
the integration of the power markets.” Prabal Adhikari, Director (Power Trading Department), Nepal Electricity Authority, Nepal

To conclude, in terms of regional integration, the South Asian countries are the least connected as compared to ot­her regions such as the EU and SAPP. But  the region is improving and currently 3,900 MW of power is being traded in the region. Among the various trading mo­des, exchange has the potential to play a significant role. A regi­o­nal power exch-ange in South Asia is ex­pected to play a significant role in energy transition in the region by allowing the countries to benefit from the daily supply -demand mismatch and di­versities, and overall promote optimum resource utilisation in the region.

“To facilitate a regional power market in South Asia, the power trading process needs to be streamlined
and made more concrete. The guidelines, procedures and regulations must be reviewed and revised regularly.” Rajesh K. Mediratta, Director, Strategy and Regulatory Affairs, Indian Energy Exchange 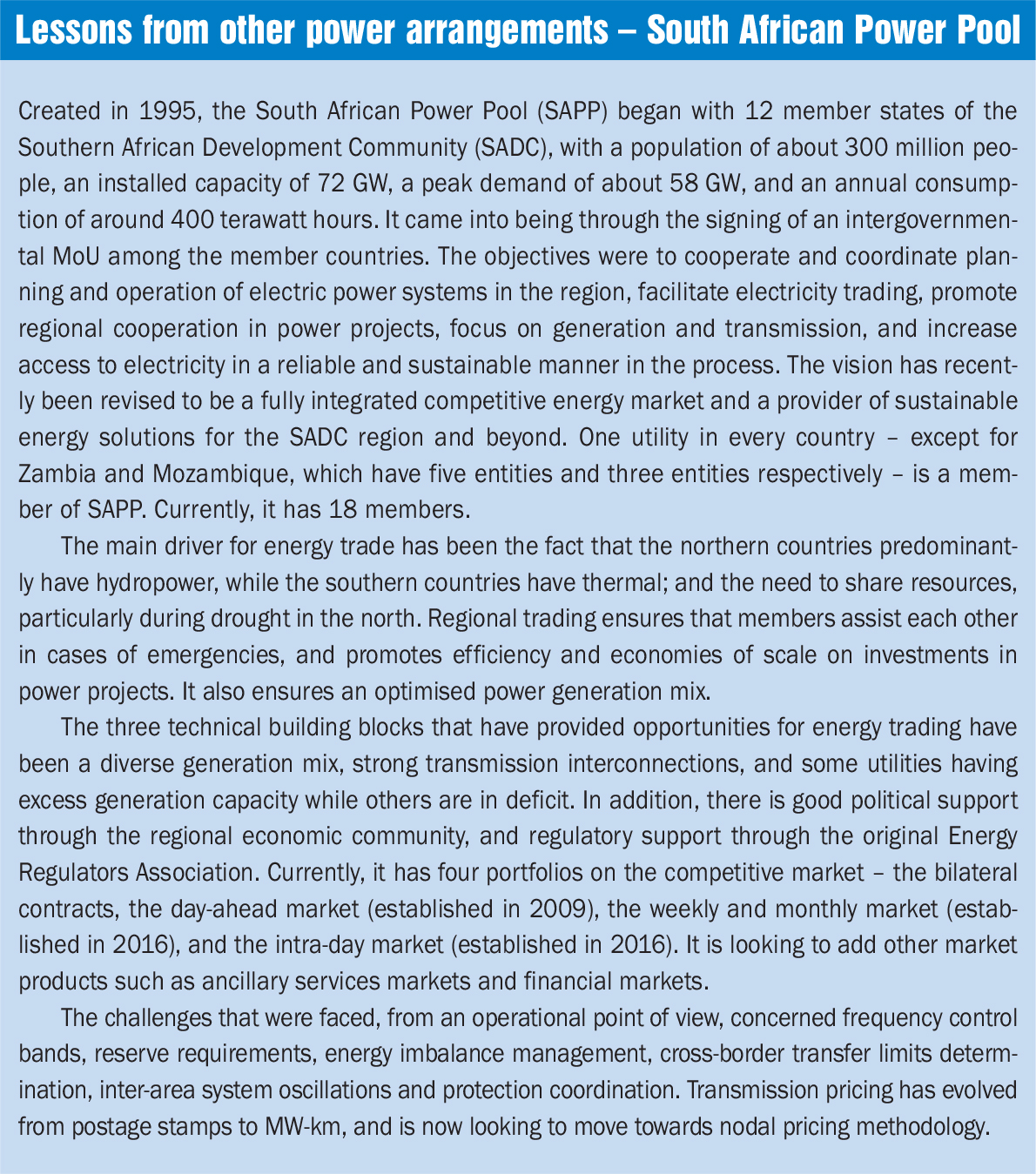 Pumped storage hydropower is one of the most developed and reliable energy storage technologies globally. With an increase in the country’s intermittent renewable energy capacity, pumped storage plants (PSPs) have assumed further importance as they […]

A number of developments over the past several months indicate the strengthening of cross-border electricity trade (CBET) in South Asia, with India playing a pivotal role in it. CBET in South Asia is mostly being […]

Energy Road Map: The future of coal in power generation