Despite being one of the most promising options for power generation, hydropower technology has witnessed limited uptake in India. The country’s total installed hydropower capacity stood at 44,963.42 MW as of November 2017, representing only about 30 per cent of the estimated potential (around 148 GW) and only 13.58 per cent of the total installed power generation capacity. Further, projects aggregating 11 GW are currently under execution.

Besides being a clean source of energy, hydropower is one of the preferred technologies for managing variability in the grid with its easy and quick start-up capability. Now, with the increasing share of renewables in the power generation mix, there is an even greater need for hydro capacity. The government is already taking steps to fast-track growth in the segment, including bringing out a new hydropower policy, reassessing the hydro potential and identifying cheaper sources of finance.

Power Line presents a performance roundup of the hydropower segment, the installed capacity and generation, the issues impacting its growth and the future outlook…

Slowdown in capacity addition has been a major challenge for the segment. Hydro capacity addition ranged from 500 MW to 1,650 MW in the past five years, much lower than thermal or renewable capacity addition. This has also resulted in a decline in the hydro-thermal ratio, which has continued to be much lower than the desired ratio of 40:60 from the system availability and reliability point of view. The current hydro-thermal ratio stands at about 17:83, indicating the lack of flexible generation required to meet the peak demand. Flexible hydropower generation assumes even greater importance now with the increasing share of intermittent renewable generation. 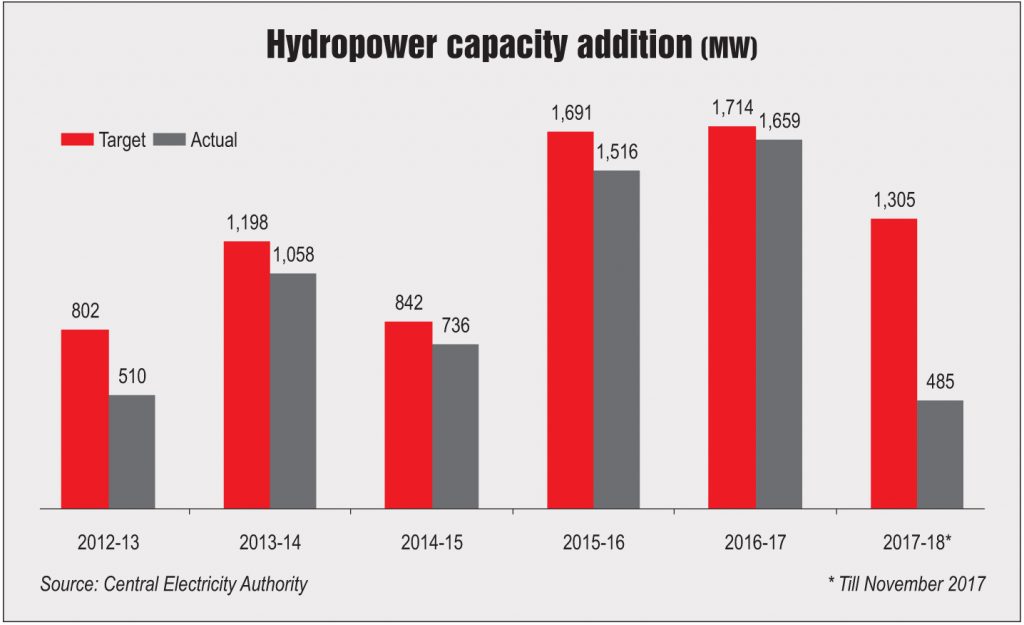 Over the past five years, the hydropower segment has recorded limited growth in generation, with a CAGR of 1.83 per cent. In 2016-17, the generation from hydropower plants was about 122 BUs, only 0.82 per cent higher than that in 2015-16 and about 8 per cent less than the targeted generation for the year. The share of hydro in the total generation (excluding renewable-based generation) has also declined over the past five years, from 12.5 per cent in 2012-13 to 10.5 per cent in 2016-17. Further, the segment’s performance in terms of generation per unit of installed capacity (MUs per MW) has declined during the same period. In 2016-17, the MUs per MW stood at 2.75 as against 2.87 in 2012-13.

In 2017-18, hydropower generation stood at 99.87 BUs for the April-November 2017 period, which is around 5 per cent higher than the generation during the same period last year. This can be attributed to better hydrological conditions due to higher rainfall and snowfall during 2017. All sectors witnessed an increase in generation in 2017-18. The central sector accounted for almost 45 per cent of the total generation during this period.

The hydropower segment has long been facing challenges that have hampered its growth in the country. These include environmental issues pertaining to delays in forest and wildlife clearances, public hearing processes and land acquisition, rehabilitation and resettlement, and stringent environmental norms; infrastructural issues such as site inaccessibility, law and order issues (especially in states like Jammu & Kashmir), and interstate water sharing disputes; and technical issues such as lack of competent contractors and skilled manpower. Further, limited finances are available for hydro projects due to low returns, high capital costs and the long gestation period involved in the development of hydropower projects. These issues result in considerable cost and time overruns for hydropower projects, which in turn result in higher tariffs, making these projects financially unviable. 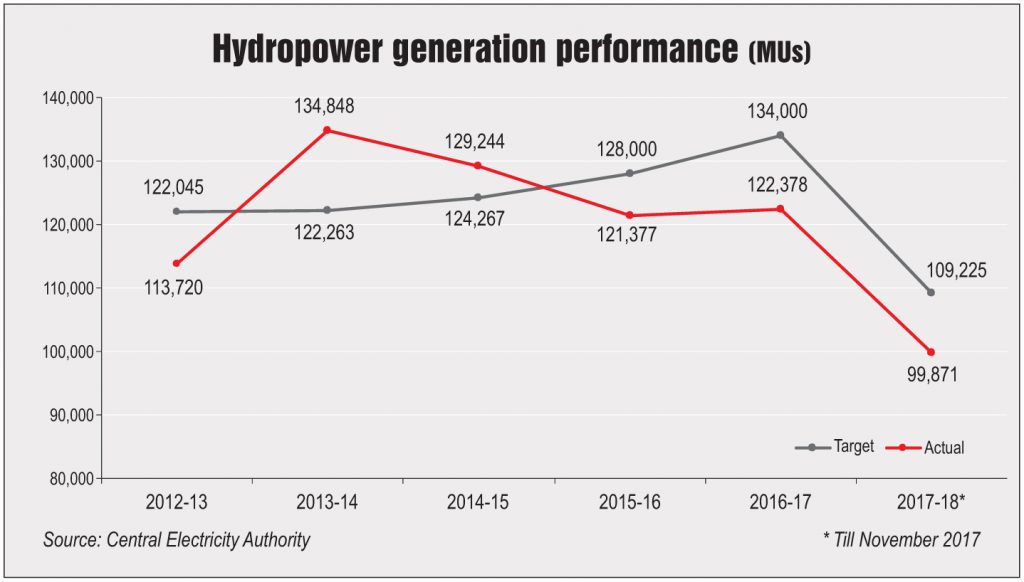 Without doubt, the hydropower segment has fallen behind its capacity addition targets given the high hydro generation potential in the country. The industry keenly awaits the new hydropower policy. Some of the incentives proposed under the policy are interest subvention of 4 per cent for up to seven years during the construction period and for three years after the commencement of commercial operations for all hydro projects with capacity beyond 25 MW; the formation of a Rs 160 billion hydropower fund and fiscal support for stalled HEPs; and the introduction of hydro purchase obligations. The funding for this policy would come from the coal cess or the National Clean Energy Fund. The policy is expected to not only open up the segment to competitive capital, but also make available various fiscal benefits to revive its growth.

In addition to the new hydro policy, the state governments need to come forward to aid infrastructure development and land acquisition for hydro project developers. Further, shifting water from the state list to the concurrent list could facilitate quicker resolution of interstate water sharing disputes.

Renovation and modernisation (R&M) of hydroelectric projects (HEPs) is a cost-effective way to deal with technological obsolescence. It re­stores lost capacity and improves the av­ailability, performance, reliability and ef­ficiency of the plant. It also helps […]

India’s reliance on coal as the dominant source of power generation continues, with it accounting for about 75 per cent of the total generation in 2017-18. However, the segment faces multiple challenges. Slow capacity addition, […]