In a regulatory filing announcing the acquisition, Vedanta stated, “The acquisition is expected to fulfil the power requirement for Vedanta’s aluminium business and through vertical integration, add synergies by providing a cost advantage pertaining to power consumption.”

The plant is located at a distance of about 80 km from BALCO and about 180 km from Jharsuguda. It is well connected to national highways and railway stations and is also located in close proximity to its water source, the Mahanadi river, and its fuel source. 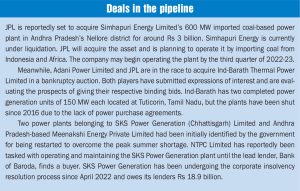 Units 1 and 2 (600 MW each) of the power plant are 80 per cent and 30 per cent complete respectively and therefore, the plant has never been operational. The coal requirement, estimated at 5.26 million tonnes per annum, can be procured from the Fatehpur East block of South Eastern Coalfields Limited’s mines.

Athena was admitted under the corporate insolvency resolution process in May 2019. The National Company Law Tribunal (NCLT), Hyderabad bench, directed initiation of the liquidation process of the company in May 2021, after the requisite majority of lenders rejected the plan submitted by Vedanta offering staggered payment of Rs 4 billion over a period of five years.

The tribunal ordered the sale of the thermal company as an ongoing process. The auction process started in December 2021 with a reserve price of Rs 15.03 billion, as per the first auction notice. However, since the liquidator did not receive any bids in the initial rounds, it was lowered with every successive auction. Both Vedanta and JPL were eyeing Athena Chhattisgarh for captive purposes, given the shortage of power supply. However, Vedanta emerged as the highest bidder, outbidding JPL. Importantly, Vedanta’s bid of Rs 5.65 billion is 16 per cent higher than the Rs 4.85 billion reserve price set for the auction.

The acquisition is likely to be completed during 2022-23 and the consideration will be in the form of cash. RBSA Advisors acted as the transaction advisers to the resolution professional.

“The acquisition of this stressed power plant augurs well for the revival of private sector interest in the power sector, which has been plagued with challenges including discom stress, coal availability issues and lower power tariffs,” stated Mitali Shah, managing director, RBSA Advisors.

Stressed asset deals are expected to pick up pace going forward. Analysts note that interest in distressed power companies has increased recently due to power supply shortages and the government’s nudge to state-owned banks to finance them, and this trend is likely to continue in the near term.

The power sector has recently seen some progress in the resolution of stressed generation assets. Vedanta Limited, a metals and mining major, re­cently emerged as the successful bidder to acquire Meenakshi Energy Limit­ed (MEL), which […]

In one of the largest takeovers in the power sector in recent years, Adani Transmission Limited (ATL) will acquire Reliance Infrastructure Limited’s (RInfra) integrated power business in Mumbai. This is the second deal between the […]

The Reserve Bank of India’s (RBI) February 2018 circular, Resolution of Stressed Assets – Revised Framework, is expected to push the gross non-performing assets (NPAs) of banks to the north of Rs 9 trillion. The […]