Solar energy is scaling up rapidly, driven by favourable government incentives and regulations, declining capital costs and innovative technologies. Improved solar cell efficiencies and cost reductions have provided an enormous fillip to the growth of solar power installations. Furthermore, there have been rapid upgrades in emerging technologies such as hybrid solar, concentrated solar power, solar thermal energy and floating solar. This is expected to make them more commercially and technically viable by reducing operations and maintenance costs, reducing intermittency issues and improving efficiency.

In June 2022, Madhera, a town in Gujarat, commissioned a hybrid solar system consisting of a 6 MWp solar PV system and a 15 MWh battery energy storage system. It also contained integrated onsite control, monitoring, data management and display solutions to enhance its efficiency and optimise its operations. This system is expected to supply energy to 1,400 households in Madhera.

Hybrid solar energy also comprises solar energy backed by pumped hydroelectricity storage (PHES) systems. These systems are a configuration of two water reservoirs at different elevations that can generate power as water moves down from one to the other (for discharge), passing through a turbine. The system also requires power as it pumps water back into the upper reservoir for recharging it. PHES systems supplementing solar energy are different from battery-based storage supplementing solar energy, however. PHES systems have a tariff of roughly Rs 4 per unit, making them efficient.

Greenko is building a hybrid solar-wind pumped-storage plant of 5,230 MW capacity at Kurnool, Andhra Pradesh. It comprises 3,000 MW of solar PV, 550 MW of wind power generation and 1,680 MW (or 10,800 MWh) of PHES. The project is estimated to cost approximately $3 billion. Going forward, Greenko intends to scale up the PHES capacity to 50 GWh by 2025 and 100 GWh by 2027 with much of it acting as a backup for solar energy.

Floating solar PV (FPV) technology essentially involves solar panels mounted on a structure that floats on freshwater sources such as lakes and rivers. The entire floating system is anchored through special high-modulus polyethylene ropes to the dead weights (concrete blocks) placed in the balancing reservoir bed. The generated power is evacuated up to the existing switchyard through 33 kV underground cables.

India has 15-16 FPV solar projects that are in the process of being executed using this technology. India has around 225 MW of FPV solar capacity in lakes, rivers and lagoons spread over several states such as Karnataka, Telangana, Madhya Pradesh, Tamil Nadu and West Bengal. 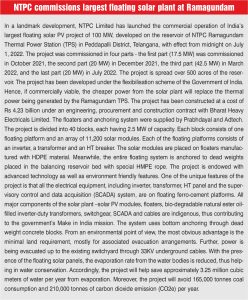 As variable renewable energy (VRE) such as solar power keeps growing, problems such as intermittency and peaks in generation will affect the grid stability and increase grid volatility. There needs to be a balancing power to offset the inconsistency in renewable power supply, as discoms demand a firm and uninterrupted supply of renewable power to ensure grid stability. Hence, policymakers intend to incentivise the development of VRE in combination with thermal/hydro power, also known as round-the-clock solar power. These solutions help maintain a continuous baseload, thereby avoiding problems during off-peak hours of solar power and guaranteeing grid stability.

In October 2019, the Solar Energy Corporation of India (SECI) issued the first RTC tender for 400 MW. This auction set the lowest tariff bid of Rs 2.9 per unit with an annual escalation of 3 per cent over 15 years. This auction in October 2019 was followed by another tender issuance of 5,000 MW by SECI in March 2020 for renewable energy plus thermal energy. The lowest tariff in this round was Rs 3.01 per kWh. At present, SECI is issuing tenders that combine renewable energy with thermal/hydro power so as to incorporate firm sources of power. This is a technology that will inevitably witness exponential growth in the next few years as it is technically and commercially viable.

The Ministry of New and Renewable Energy adopted the National Wind-Solar Hybrid Policy in 2018 in order to drive the adoption and installation of WSH power in India. The National Wind-Solar Hybrid Policy extends several waivers and incentives to developers. Various state governments have also come up with their own WSH policies including Gujarat, Andhra Pradesh and Rajasthan. The tariffs of WSH plants range from Rs 2.49 to Rs 2.67 per unit depending on the blend of wind and solar in the project. The greater the composition of solar power in WSH, the lower the levellised tariff.

Over the past few decades, technological advancements, along with finance and business model innovations, have led to notable cost and performance improvements in some renewable energy segments, particularly wind and solar photovoltaic (PV). These have […]

Renewables Boost: Telangana aims for 5 GW of capacity by 2019

Telangana’s installed renewable energy capacity as of May 2017 stood at 1.54 GW, accounting for nearly 13.4 per cent of the total installed capacity. The government has been making concerted efforts to augment capacity, especially […]

Interview with Suman Sharma: “India needs a mix of solutions”